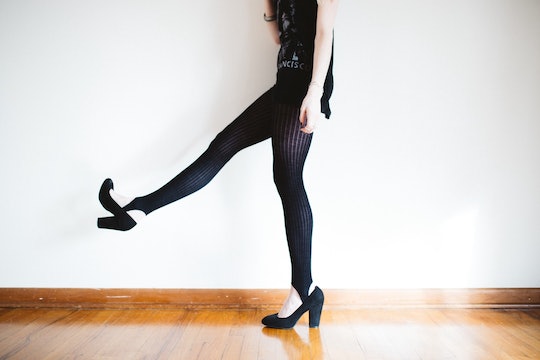 It should go without saying, but specific actions does not a feminist make. A person cannot become a feminist simply by choosing not to shave or choosing not to wear pink; One cannot become a feminist, instead, simply by choosing to do whatever our society has decided is a "feminist action" that fights the patriarchy and sticks it to misogynistic norms. Sure, you can do all of those things and be a feminist, but it's not merely an identity built by amassing isolated Feminist Badges™ (although, those sound fun and we should make them a thing).

The point is, being a feminist is less about how you look, and more about what you believe. If you're down with gender equality and believe that social, political, and economic playing fields should be the same for all genders then you, my friend, are a feminist. And contrary to a still (sadly) popular belief, there isn't a personal preference that could change that. And that includes something I'm a fan of that has often garnered me shade from the are-you-feminist-enough police: wearing high heels.

You can be incredibly girly and still be a feminist, you can shave every hair on your body and still be a feminist, and you most certainly can wear that breathtaking pair of six-inch stilettos and still be a feminist (although you might not be able to walk; you can be a sitting feminist). The idea that a woman is a "bad feminist" because of her likes and/or dislikes is just another form of oppression; a subtle attempt to control women by shaming them into acting a certain way or liking a specific thing. Women shouldn't be beholden to other people's narrow-minded views of feminism, and as feminism continues to become more of a popular belief and less of a taboo concept, women (and men) are transforming society's view of the stereotypical feminist to include people with varying preferences. We're moving towards a concept of feminism that allows people to truly be who they are (which feels like it should be a given, but totally is not yet).

Here are 7 reasons why wearing heels doesn't make you a bad feminist because — and it bears repeating — a specific fashion choice does not a feminist make.