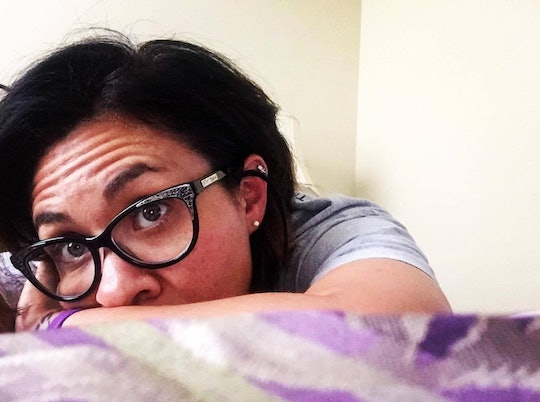 As a child I witnessed a lot of unpleasant things. Traumatic things. Things that would forever change the person I'd become as a woman, partner, and mother to two children. Mental illness runs in our family and, yet, I didn't know or understand the extent of the illnesses until I struggled with anxiety and depression on my own. So there are more than a few reasons why I talk to my kids about my mental health, starting with our family history. Through no fault of their own, they're predisposed to depression. As a result I carry an immense amount of guilt over something I have no control over, too, and the only way to combat that guilt is to be open and honest with my precious children.

I was depressed in early elementary school. My parents were going through a divorce and I had anxiety going to school after I'd accidentally wet myself during a group project. Every day felt like another new battle. I was bullied and harassed when I wasn't home, and then when I went home I didn't feel safe or secure. I remember watching my mom go through episodes of high highs and low lows, but no one ever told me why. I didn't understand what was "wrong" with her, anymore then I understood what was "wrong" with me, either.

By the time I was 7-years-old and having frequent panic attacks, my grandmother stepped in. Not only did she comfort me by chronicling her by sharing her own struggles (from suicide attempts to miscarriage and depression), but she introduced me to my first therapist and aided me in my quest for the right medication. She was the residual sounding board for which I'd toss my thoughts at, reminding me I wasn't broken and it wasn't my fault. I could heal.

Over the years, I've endured a few desperate fights with depression, barely surviving as the "winner" of each round. I'm no stranger to suicidal thoughts and tendencies, self harm, and eating disorders as a means of trying to control the disease. But through all my coping mechanisms, I've learned a lot about the mental illnesses that attempt to rule my life, and the kind of person they've morphed me into. Mostly, as a mother to two children.

My kids aren't numb to the days I can't manage a smile. They don't ignore the moments I can't concentrate on what they're telling me. And they're daily witnesses to the remnants of my Obsessive Compulsive Disorder (OCD) that controls every portion of my schedule. Instead of pretending I'm not this way, I want to educate them on what our family has been through, what they've tried, and what it means to live with these disorders and how they've changed the way our brains operate differently than those who aren't affected. I tell them these things in the hopes that they can be proactive if diagnosed with similar illnesses. And, if they don't (and I hope they don't), they can practice empathy and compassion for those of us that do.

If I can arm my kids with as much information as possible, and explain my experiences dealing with mental illness in an age appropriate way, I will. It serves them no good to pretend things are fine when they so obviously aren't — when I'm not. Here are just some of the reasons I've decided to be open and honest with my kids about my mental health:

More Like This
Is There Parenting Advice To Take From ‘Strangers To Ourselves’?
Experts Explain Whether It’s Safe For Your Baby To Sleep On Your Chest
Tips For Apple Picking With Kids
Here’s Your Guide To Paced Bottle Feeding