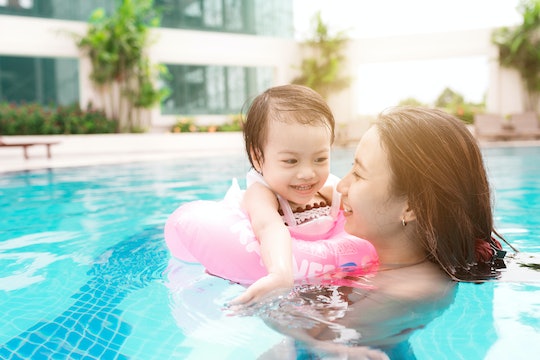 7 Struggles Of Putting Your Kids In Swimming Lessons

Today I took my youngest son to his very first swim lesson. Honestly, I'm still trying to recover from the experience. I've been through the swim lesson saga before, with my first, and it was quite the wild ride with him, too. Still, I wasn't expecting it to go so badly this time around, because unlike my first child, my second absolutely loves the water and has never been afraid of it. So it's safe to say that between my two boys, I'm quite familiar with the struggles of putting ones kids in swimming lessons. If you've ever considered putting your kid into swim school, or are a swim school survivor, you probably can relate to my woes.

Here, let me paint you a picture of my day: I picked up the little guy from school, and reminded him that we were off to our exciting "adventure" of swimming class. He had been looking forward to swim class basically all winter long (or so he said, as I no longer trust anything that comes out of the mouth of the 3 and under set). He immediately began to protest the swim lesson and thrashed about in his stroller. Then, as we approached the subway, he began to scream, "let me out! Let's find a secret door!" I have no idea where he got the idea of a secret door, but I intend to find out about that later.

When we got to swim school, he told me he was now "all growed up" and didn't need swim lessons anymore. He then continued screaming, and refused to get undressed or wear his swim diaper. The locker room cleared out because I assume his cries made the other children nervous. Once I won the getting dressed battle, I handed him to his swim teacher, then ran and hid under a bench until the end of class. Occasionally I peeked over to look through the observation window, but never for more than .5 seconds lest he spot me and commence hysterics.

Finally, the lesson was over. "Can we go back in, Mommy?" he asked, smiling ear to ear as I wrapped him in his towel. "He had so much fun by the end of the lesson!" his teacher told me.

Was my kid lobotomized while I hid under that bench? How did they do that, I wondered? Must be something in the pool, right? Either way, the whole experience was up there as one of the more stressful parenting things I've done, and though I know it's something that is very valuable for my son, I won't be treasuring this milestone moment. For now, swimming lessons and everything having to do with them, will simply be a struggle.