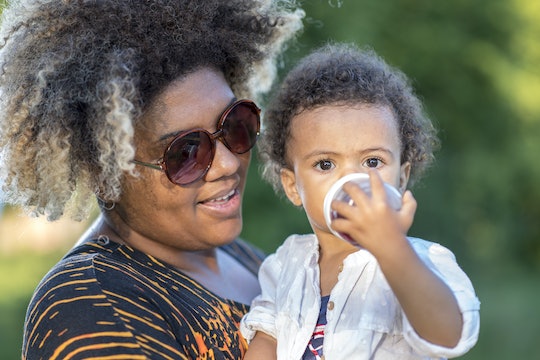 When you think of millennials, you probably put them into one of two categories: coddled, self-obsessed snowflakes or educated, tech-savvy progressives. Neither description really captures the generation fairly, but that's what millennials are generally reduced to. Regardless, I'm guessing the word "traditional" doesn't come to mind. But that's where you're wrong, especially when it comes to parenting. You may be surprised at the statistics that show millennial moms are actually more traditional than their parents.

As a liberal, forward-thinking person typical of my generation, I'm often surprised at just how "traditional" my life appears, at least from the outside looking in. When I had my daughter, I quit my teaching job of 13 years to become a stay-at-home mom. Even though I now work two side hustles, I'm still my kid's primary caregiver. I also bear the brunt of both household maintenance and meal preparation. As old-fashioned as it is, my husband provides for us financially. I think what sets my situation apart, however, is that it's my choice. I've opted for a so-called traditional lifestyle because it's what I wanted, not because it was my only choice or because the choice was made for me by someone else.

According to the Pew Research Center, millennial women account for the vast majority of births in this country. Millennial moms are shaping parenting in the United States, and they're doing it in a way that's unexpected — by returning to (at least some of) the ways of the past: