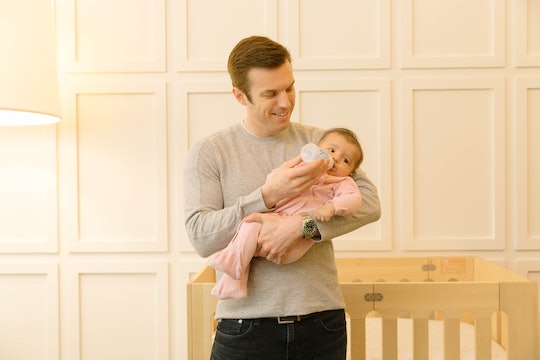 7 Things Every Grown-Ass Dad Automatically Does, Because This Is 2018

Times are changing. Yes, we still live in a patriarchal society urging us all to adhere to traditional gender roles, but less and less of us are listening. Today's dad isn't just "OK" shouldering more daily responsibilities, he's thrilled about it. He doesn't "babysit," he parents. He volunteers and takes the lead and doesn't sit back and wait for instructions on "what to do" as a father. In fact, there are more than a few things every grown-ass dad automatically does because, well, this is 2018, people. It's about damn time.

When I was young, fathers generally took on the "provider" role. In other words, they were the so-called "breadwinners" that didn't lift a finger at home because they brought home a paycheck every other week. Most, though not all, I'm sure, dads from way back when believed women were meant to give up their dreams to stay home with the children. A mom was to cook, clean, and look pretty, while never complaining because what she did at home wasn't actually "work."

Again, this isn't to say all men felt this way or that all moms stayed at home (in fact, in the '50s that was a pretty privileged choice, and many women of color worked outside the home like their partners), but, for the most part, dads were seen as secondary parents. My dad was no different, and neither was his, but thankfully I married a man who's into equality. He doesn't consider himself "back up," and like every other grown-ass dad he knows what is expected of him. Because, again, it's 2018, people.

More Like This
Experts Explain Whether It’s Safe For Your Baby To Sleep On Your Chest
Zaya Wade Is Rocking New Long Hair & As Gabrielle Union Put It, She's A "Vision"
Introducing My Boyfriend To My Kid
I’m Getting Dual Citizenship For My Jewish Children, Just In Case.