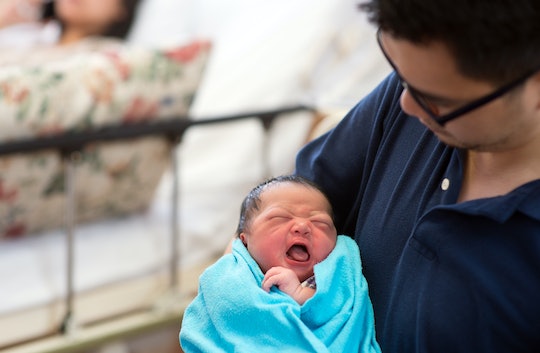 I don't know if it was the buzz of the surrounding machines, the non-existent cry of our son as the doctors tried to resuscitate him, or the fact that I'd already been through labor and delivery once before, but I knew something was missing after I had my second child. I remember lying in bed, still foggy, waiting to hear my partner say something comforting, loving, or even funny. Instead, nothing. Honestly, there are so many things I wish my partner had said to me in the first hour after giving birth, but there's nothing he, or I, can do to change that now.

I can't blame my husband entirely, though. After all, I have no idea what it's like to watch your wife endure a traumatic birth. Labor was incredibly painful and long (three days) and it took a toll on everyone involved. Our sweet boy was not only stuck in the birth canal, but he had his umbilical cord wrapped around his neck. When he finally came into the world, the umbilical cord snapped. In that moment, and in the absence of a newborn cry, my world went dark.

The doctors and nurses swiftly carried our son away, my partner disappearing along with them. I had passed out from an immense loss of blood, but I do vaguely remember seeing the shape of my partner by my side periodically. One minute he was there, the next minute he was gone. I didn't know what was going on at the time, and, looking back, I wish he had been more engaged. In the end, I truly believe that if he had said some of the following in that first hour after such a terrifying delivery, I wouldn't have felt so scared, unsure, and alone.