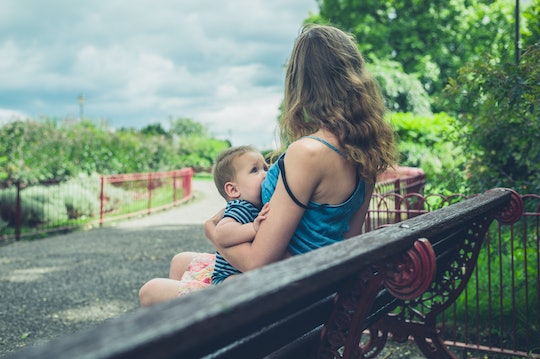 7 Things No One Says About Post-Breastfeeding Boobs, But I Will

If you've breastfed before, chances are you're well aware of what happens to your boobs when all is said and done. But if you're about to start your nursing journey, or you just don't have shamelessly honest (almost to a fault) people surrounding you, post-breastfeeding life is probably a mystery. Why? Well, because there are things no one says about post-breastfeeding boobs, but I will. After all, honesty is the best policy, and when it comes to anything parenthood related it's better to be armed with all the information than left in the dark.

My experience may not be true for everyone who breastfeeds, of course. There may be slight (or massive) variations in boob changes between different post-nursing humans. But I'd be pretty damned shocked if you didn't experience your post-breastfeeding boobs as almost entirely different body parts than your pre-breastfeeding boobs. And, honestly, that's kind of comforting, in a way. Us parents can have wildly different experiences, but there's usually a common thread in there somewhere that makes us feel less alone.

Full disclosure? I was a "free the nipple" kinda human before "free the nipple" was a thing. I've bared my bosoms for all sorts of reasons, in all sorts of ways, at all sorts of ages. Mostly due to quick changes backstage while an undergraduate actress, but also because, sometimes, I just felt like it. So I'm maybe not representative of the entire breast-owning population, but I feel confident in stating that if you breastfeed your relationship to your breasts will likely change, and sometimes drastically. So what are the tips you're unlikely to be told about post-breastfeeding boobs by anybody but me? Read along, my friends:

More Like This
Chrissy Teigen Felt More Shamed For Using Formula Than "Pulling Out My Boob" In Public
The Best Black Friday 2022 Deals For Moms
20 Heartwarming Episodes To Help Prepare Your Child For A New Sibling
40 Lovely, Lively, Lavish Girls Names That Begin With “L”