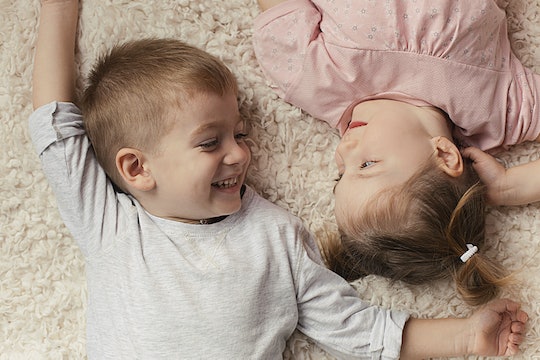 7 Things Parents Do Every Day That Perpetuate Sexism

Sexism isn't always blatantly obvious. In fact, lowkey sexism lurks all around us and penetrates many aspects of parenting. I'm sure I've inadvertently done and said some sexist things around my children, simply because I'm so used to society's standards for gender roles and toxic masculinity. I'm careful, of course, but every day I learn something new. Still, sexist stereotypes are so ingrained in our lives that it's no wonder there are so many things parents do every day that perpetuate sexism. Some of these seem so benign and so silly that it's often difficult to step back and realize those things are, in fact, significantly problematic.

My daughter is 8 and my son is 3. When my son was born, all we had in the house were traditionally "girl" toys. My daughter had some superhero dress-up clothes and a few athletic toys, but overall she really enjoyed her Barbies and dollhouses. We didn't buy my son any toys, though, because we didn't see the need for it when his sister had so many he could play with. His choice of toy was her Barbie convertible. He would take her dolls and stuffed animals, stuff them all into the convertible, and drive it around the house. No one forced him to choose the car, either. He just did. From the beginning, before he even went out into the world, he was drawn to cars.

When it comes to gender, my children identify with their sex in the "traditional" sense, which means it is my job to be extra diligent in teaching them how to function in this world without being sexist. I don't ever want to hear my son tell a girl to smile because she will "look so much prettier." And, I don't ever want my daughter to not respect a man because he doesn't hold back his tears when he feels overwhelmed. I want my kids to function outside of these sexist ideals.

Raising respectful and non-sexist children is probably almost impossible in a society where sexism is so deeply-ingrained. But just because it may seem like an impossible feat, doesn't mean we shouldn't all try. At the very least, as parents, we should do our best to avoid doing the following: