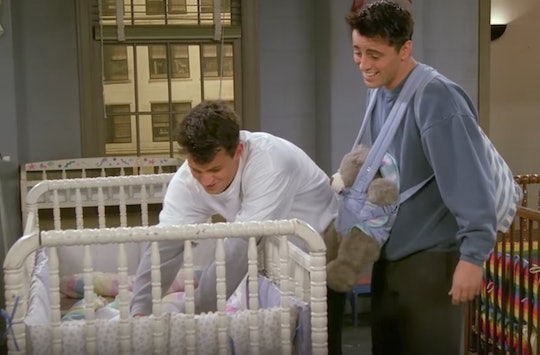 7 Weird Things Men Do Around Babies, Because Men

For those men who haven't had any exposure to babies and find themselves being offered to hold one, their first response may be to cross their arms and declare themselves simply "an observer." Men can find it awkward and a bit frightening to be around babies for the first time (as can women, for what it's worth). And as we know, things that are unfamiliar and scary can breed some strange behavior in people. In fact, there's quite a list of weird things men do around babies, from the laughable to the just plain annoying.

Of course, it is unfair and biased to make sweeping generalizations about an entire gender. It's certainly not a given that every woman is a natural when you put a baby in her arms. For every woman that feels the impulse to hold every newborn she passes on the street, there's a woman who recoils at the sight of a baby. Still, there seems to be some level of comfort and recognition in plenty of women when it comes to what to do and how to act around a tiny blob human, sometimes more so than men. Maybe it is innate, or maybe it is all the gendered play that society foists upon women since preschool, what with baby dolls and mini carriages and tiny kitchens. It's no secret that our culture tries to prepare women for parenthood and men for work outside the home, so if a dude feels odd around a baby, it probably (read: definitely) has something to do with the messages they've received since always.

I know plenty of men who are naturally very nurturing, by the way. And I know plenty of men who, until they had their own babies and got the hang of holding a brand new life in their hands, could hardly stand to be near a baby. My own partner is one of the former — he's a man who absolutely loves babies. He's the first guy to ask to hold every newborn we meet among our family and friends, and he was always the more confident of the two of us when it came to handling our own newborns. Most of the "weird things" below do not apply to him, but some of them do, and I have a feeling they might apply to the man in your life (or the man strangers around you), too: