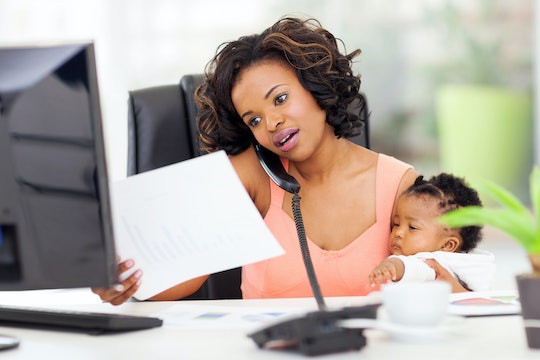 7 Working Mom Myths You Don't Have To Believe

Growing up, I didn’t notice or pay attention to the stigma attached to working mothers. My own mother worked, as did a lot of my friends’ moms, and it was kind of the norm in our working class neighborhood of Queens, New York. It wasn’t until I was in my 20s and working myself, that I noticed that moms who worked outside the home were categorized as, well, exactly that: moms first, employees second. Who was expected to prepare the monthly office birthday celebrations at the ad agency where I was employed? Well, the "mom" of our office, of course, who was designated as the figurative, and literal, mother of our office.

And while I did learn from my so-called "office mom," like how to cut a cake for 25 people without the slices falling apart, I never bought into the myth that working mothers had to bring their mom game to the office. I had plenty of male colleagues who had kids, so why weren’t they expected to lay out the plastic forks?

Working mom myths are just that: outdated stories that are being perpetuated in a world where office culture is still informed by the men who established it centuries ago! Who says a 9-to-5 workday is best for working parents? That schedule took shape because men, whose wives tended to domestic responsibilities during the day, literally had nothing to concern themselves with other than bringing home a paycheck. If anything, working moms have been the most instrumental of all kinds of employees in galvanizing the changes companies are now embracing in terms of paid leave and flexibility. In fact, Sarah Lacey, the founder and editor of the influential Silicon Valley blog Pando, is writing a new book (working title: "A Uterus is a Feature, Not a Bug") arguing that motherhood makes a woman a stronger employee, not a weaker one. My anticipation for this book is, well, lets just say it's off any chart a working mother would make for a high-level meeting or presentation.

So sure, we may not get paid the same as men, but we don’t need to believe the same working mom myths that have been out there since "Baby Boom." We can take a page from Lacey's book and kick a few to the curb, staring with these:

More Like This
10 Moms On Why They Exercise
Marie Kondo Gives Up Tidying Post-Kids, Sparking Joy For Moms Everywhere
Julia Fox’s Apartment Tour Is Peak Mom Realness
Paris Hilton Is Officially A First-Time Mom
What Parents Are Talking About — Delivered Straight To Your Inbox