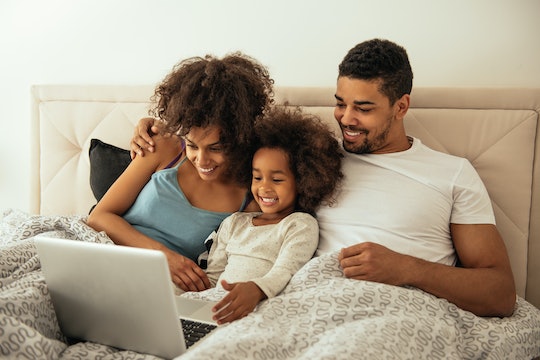 Oh, Facebook. It's one of the best and worst things technology has ever given us. It's a total time waster, but it's also a wonderful way to connect with people you wouldn't otherwise be able to talk to. There's a shift that happens on Facebook, though, when you become a parent. You're no longer thinking only about yourself, or even your partner, when you're posting on Facebook. Instead, you've got a child — and a future adult — to think about before posting. These eight basic rules for posting about parenting on Facebook are critical when that shift from pre-parent sharing to post-parent sharing, finally (hopefully) occurs.

We all have those friends who post the most embarrassing or annoying or downright mean things about their kids on Facebook, or get into enormous and seemingly endless fights in the comment section of some stranger's post. If you're like me, you zoom right by them as you're scrolling through your feed, trying your best to ignore the drama. Every so often, though, a post from a friend about a struggle or lesson she's learned with her kids is so helpful that it can wash away all the social media angst in a heartbeat.

When I first had my daughter, I wanted to shout about every single breath she took from the rooftops (read: Facebook, the modern equivalent). However, I had to remind myself as the reality of her joining our family sunk in, that she has her own story that isn't mine to tell. One day, she's going to be some tech whiz and she's going to figure out a way to find all the things I've said about her from the depths of the internet. I want to make sure that what she sees isn't a stream of complaints about how hard parenting her is, or shots of her naked booty running from the bath tub, no matter how cute that booty might have been. So, while I'm not for telling other parents how to speak about their children (on the internet, or anywhere else for that matter) here are a few kind suggestions when it comes to posting about parenting on Facebook: