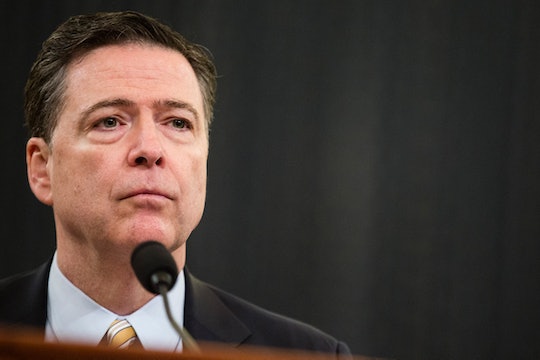 8 Questions James Comey Should Be Asked

It's #ComeyDay on Capitol Hill. Former FBI Director James Comey will publicly testify before a much-anticipated Senate Intelligence Committee hearing, his first such appearance since being fired by President Donald Trump last month. No longer a government employee, Comey is able to speak more freely than he had in previous public testimony about the Trump-Russia investigation before congressional intelligence committees. As the country awaits his remarks, here are the most important questions James Comey should be asked during his testimony on Thursday.

On Wednesday, Comey released a prepared statement in advance of his congressional appearance. In it, he described the world's most awkward silence between him and President Trump, as well as the president's resolute denial that he had never been involved with "hookers in Russia" — Trump's words, not Comey's. In addition to its many revelations about Comey's in-person meetings with Trump, as well as direct phone calls, Comey has managed to control and shape the narrative heading into Thursday's public hearing. His statement forces the hands of Republican members of the Senate Intelligence Committee, who, in his last congressional appearance, were more concerned about leaks than the fact that the Trump campaign may have possibly colluded with Russia to influence the election.

Let's Talk About Those Memos

A week after Comey was fired by Trump, The New York Times released a major story that Trump asked Comey to end the investigation into former National Security Adviser Michael Flynn. Even more revelatory was that Comey sent out a detailed memo documenting the conversation. Here are some questions senators should ask Comey about those memoranda:

Let's Talk About The Day You Were Fired

The day after Trump fired Comey, the president issued his first public comment about his decision to fire the distinguished career intelligence professional, saying Comey "was not doing a good job."

This is one of the most crucial elements for lawmakers trying to make a case for impeachment: If the president did anything to impede the FBI's investigation into the Trump campaign's ties to Russia, he could be found responsible for obstruction of justice — an impeachable offense. We know Trump asked Comey to drop the Flynn investigation; the Senate Intelligence Committee has the chance to examine whether Trump's requests venture into more inappropriate territory.

Comey is scheduled to testify before the Senate Intelligence Committee at 10 a.m. Eastern Thursday; you can watch Comey's testimony online via C-SPAN.