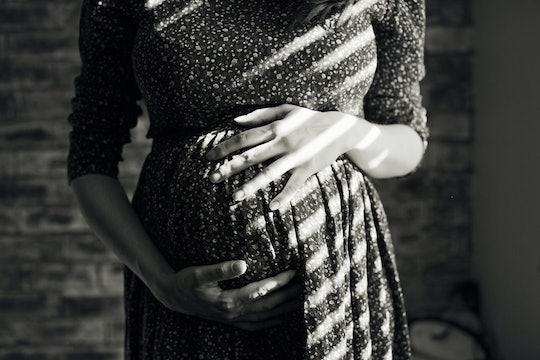 To be honest, I kind of (read: definitely) hate being pregnant any time of year. Each season has pros and cons as far as pregnancy is concerned, in my humble opinion. That said, there are so many reasons why being pregnant during New Year's Eve is the worst. I am serious, you guys. The worst.

I used to love New Year's Eve, too. Staying up late, putting on fancy clothes, attending extravagant parties, watching the ball drop, and sharing a kiss with my honey at midnight? That sounds like a great time. Then I experienced my first pregnancy, and all of my New Year's plans went out the window. While all of my friends were drinking champagne, attending parties, and watching the ball drop, I was puking, falling asleep shortly after dinner, and getting annoyed by the midnight fireworks that would wake me up without fail.

I had almost reached the end of my last pregnancy when New Year's Eve came around again. My husband and I decided to rent a fancy hotel room and have a babymoon of sorts. I ended up throwing up (again), being too tired to go out for the dinner we planned, and falling asleep while watching HGTV. Then, when midnight came around, those damn fireworks interrupted our child-free hotel sleep. Those bastards.

Fun fact: if you aren't pregnant yet, and you don't want to be, you should know that New Year's Eve is actually the second most popular holiday on which to conceive. I don't know if it's the alcohol, the Midnight kissing leading to other things, or the fact that it's so cold outside you decide to just stay in bed, but over 4 percent of babies in the U.S. are conceived on New Year's. Who knew?

Regardless of how far along you are in your pregnancy, if you are anything like me, you might just find that it's the absolute worst. Happy freaking New Year, my friends.