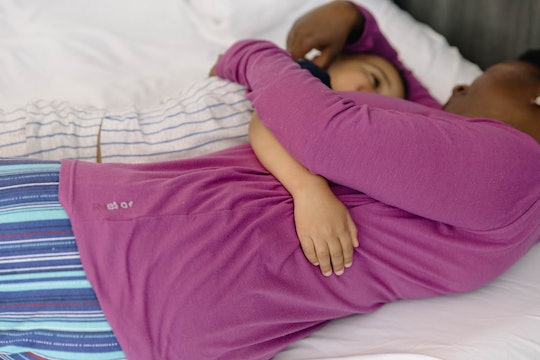 I knew I wanted to try to breastfeed my babies when they were born. Luckily I was able to and, as a result, they thrived. What I didn’t know is how long I thought I’d continue. My goal was a year, but after the first birthday I kept nursing. My kid started walking and talking... and asking to nurse. We got some stares, sure, but then their second birthdays came and went. And, honestly, I never felt like I should apologize for breastfeeding my 2-year-old kid. It just felt like the “natural” thing to do, so I did it.

To call breastfeeding “natural” is not accurate, though. True, moms and babies have been participating in breastfeeding since the dawn of mammals living on this planet, but I was not born knowing how to feed my infant. I had to figure it out and I needed some pointers. I took an in-hospital class for new moms in the maternity ward, where we sat around, exposing ourselves, trying to get our kids to latch on. Nothing about that felt natural. But once I got into a groove with nursing my newborn, it was like we were two puzzle pieces connecting. It eventually did feel natural. The closeness during our breastfeeding sessions just felt right. Why would I ever want it to end?

The reason to wean did present itself, though, when I entered my second trimester with my second baby. It was getting increasingly uncomfortable to nurse my toddler before bed. She transitioned from nursing to bottles and sippy cups and, as a result, never looked back. Six short months later I was breastfeeding again. And would, again, continue to do so for two years.

I didn’t know a lot of other moms who breastfed for that long, and I guess there is something surprising about someone who looks more like a child and less like a baby reaching into her mother’s shirt to try to fill up at the milk bar. But, honestly, it doesn’t matter what it looks like to others. It mattered what it felt like for me and my kid, and breastfeeding both my children way into toddlerhood didn’t interfere with any of their development or social skills.

So here’s why I refuse to apologize for breastfeeding my 2-year-old kids:

More Like This
There’s A Reason Your Baby Always Falls Asleep While Breastfeeding
If Breastfeeding Makes You Tired, Here’s How To Keep Your Energy Up
Here’s Your Guide To Paced Bottle Feeding
Tips For Apple Picking With Kids