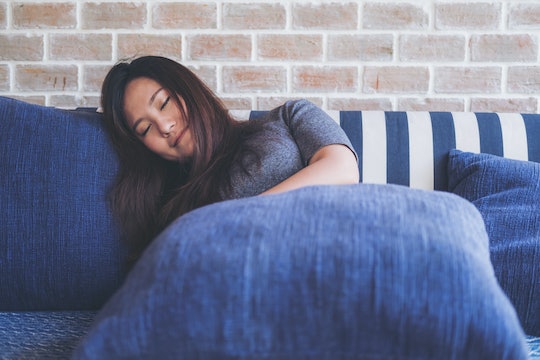 As I write there's a 10-day-old baby in the next room, snoozing away. Needless to say, he's managing to get the recommended amount of shut eye, but my son and his 2-year-old sister are conspiring to keep their parents from doing the same. My sleep-deprived condition has me thinking wistfully about the glory of a mid-day nap, and all the things a mid-day nap will automatically fix for every new mom. I'd say a new mom can dream, but that would require sleeping and, well, we've established that's not a thing I'm doing much of these days. Yay parenthood, right?

When my first child was a tiny newborn, I used her first nap of the day as a way of playing catch-up and getting myself back to neutral. I wouldn't bother getting dressed until then, either, and I definitely didn't beat myself up about spending a good part of my day in my pajamas. Instead, I just considered my day to start a little later, especially since I would spend my night waking up every two or three hours to feed her. By the time she got up from her first nap, we were both just a little fresher and ready to start the day. We'd get dressed shortly after and I unapologetically owned the fact that, as a new mother, I was starting my day at 10:00 a.m. and not a minute earlier.

Now that I have a toddler and a newborn, napping in the morning isn't really an option. Like, at all. Still, on the odd day when the two of them are settled and sleeping at the same time, a mid-day nap is a great cure all, and automatically fixes the following: