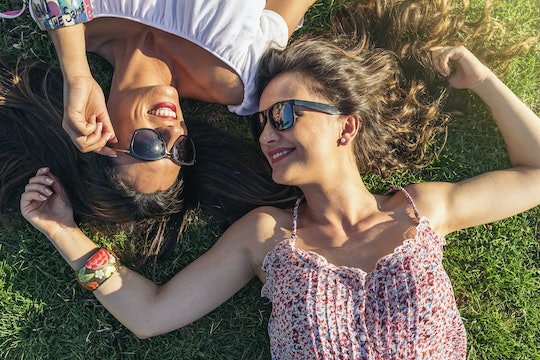 Children, especially young ones, don’t always have the language to explicitly tell us that we’re doing things "right." They may smile and giggle when we care for them, or reach for us first in an unfamiliar situation or give us hugs and kisses and act like our little shadows throughout the day. But especially when they’re very new, they can’t just say, “Hey, Mom! I know you’re nervous and doing your best to keep me alive and help me grow into a decent person, and I just want to say that you’re awesome.” That’s why one of the best moments in the life of a new mom is when another mom compliments your parenting.

A few months ago, my son and I were enjoying a perfect spring Sunday afternoon. I had performed that morning, so I was a little more dressed up than normal, and the weather was gorgeous, so we decided to take advantage by spending the rest of our day at the zoo. We had been there about an hour, laughing and talking about the big cats (his favorite) when another mom passing by caught my eye and said, “Aww! You look so together. Wait, how many kids do you have? Just one? OK, that’s why. You’re not better than me, haha!”

“Uh, thanks?” I responded, flattered by her praise but a little taken by surprise by the unexpected peek into her inner monologue and self-comparison, in the end. I thought she had it plenty together; she was out and about with her three kids, who all appeared healthy and like they were having a great time. I said as much and thanked her again, and we had a quick laugh. As we kept moving, I kept reminding my son, who was new to walking (at the time) and still learning the ropes of being on his own two feet in public, to “Hold hands with mama, and leave things that are on the ground, on the ground.” Just then, a passing dad with older kids told my son, “Those are good rules,” while another mom said, “Good job, Mom!”

I felt amazing. Later, I actually wrote in my journal about how great it feels to be acknowledged by my still somewhat-new community of parents. There’s so much conversation out there about parent-shaming and judgment, and it’s especially common for moms to be the target of criticism over every little choice that we make (often in situations where our male counterparts would get a pat on the back just for bothering to try at all). When everything feels new and you’re not always sure if you’re doing things right, being caught doing something right feels all kinds of fantastic. So, with that in mind, here's what every new mom thinks when another mother compliments her parenting, because a kind word can go a very long way.