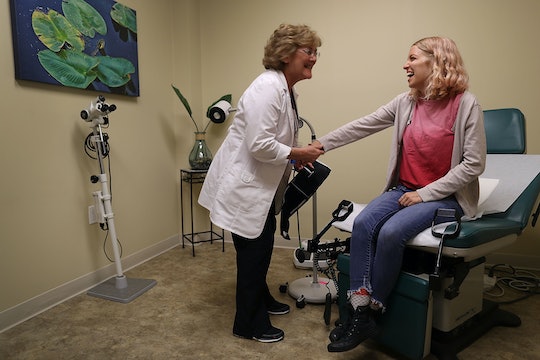 9 Pre-Existing Conditions The AHCA Would Charge More For

Last month, Republicans in the U.S. House of Representatives passed by a narrow margin a revived version of the American Health Care Act — a.k.a. Trumpcare. The GOP bill, which will repeal and replace the Affordable Care Act, puts insurance coverage at risk for millions of Americans. But people with pre-existing conditions will feel the brunt of the pain, as Trumpcare does little to protect them from higher premiums and discrimination. In fact, here are nine pre-existing conditions that women have that Trumpcare will charge more for.

The Senate is close to passing its rewritten version of the AHCA, which the Trump administration wants to see action on by end of next month, according to CNBC. Although the Senate will make changes to the House version of the misguided bill, it is expected to keep in tact — in some form — the Trumpcare amendment that would allow states to opt-out of key ACA provisions. This would have devastating consequences for people with pre-existing conditions, as benefits are likely to vanish and premiums are expected to climb.

According to the Kaiser Family Foundation, most of the conditions listed below were once used to charge people higher insurance premiums or deny coverage entirely. But, as Money reported, health policy experts believe there are other ailments that can cause premiums to skyrocket.

According to the National Breast Cancer Foundation, one in eight women will be diagnosed with breast cancer in their lifetime. Breast cancer is one of a number of cancers that insurance companies considered a pre-existing condition prior to the passage of the Affordable Care Act. Under Trumpcare, breast cancer survivors could be stuck paying tens of thousands of dollars more for insurance, according to the Center for American Progress.

According to ThinkProgress, a spokesperson for Anthem Blue Cross once said that "having a child is a matter of choice" to justify why it would charge higher premiums to pregnant people, as well as not insure pregnancy-related care. And, according to CBS News, many insurers look at pregnant people as inherently riskier clients who are more expensive to insure. The Affordable Care Act mandated carriers to cover maternity care, but that requirement would not apply in states that waive that provision under Trumpcare.

Before the Affordable Care Act, transgender people were denied health insurance because of their gender identity. Although the ACA wasn't a full solution, the landmark reform expanded coverage to hundreds of thousands of trans youth and trans adults. But Trumpcare threatens to take that away.

Delivering by C-section increases your chances of needing the procedure in your next pregnancy. According to a 2008 article in the New York Times, many insurance carriers have denied coverage to people who've had C-sections because they don't want to pay for future Cesarean operations. Other companies would charge higher prices or "factor in chronic or recurring problems that might have led" to a C-section birth, ThinkProgress reported.

According to the U.S. Centers for Disease Control and Prevention, one in nine parents experience postpartum depression (PPD). Under the Affordable Care Act, new moms living with PPD were able to access affordable treatment and support because of the law's essential health benefits provisions. But that's one of provisions states can waive, which means people dealing with postpartum depression may once fall back into the shadows.

Although sexual assault and domestic violence happens to everyone, women and trans women are more likely to be victims. According to the Rape, Abuse & Incest National Network, one out of every six women in the United States has been raped or sexual assaulted in her lifetime, while FORGE reports that one in three trans girls have experienced sexual violence. One in three women have also been victims of domestic violence, according to the National Coalition Against Domestic Violence. Before ACA, some insurance carriers would reject applications of domestic violence or sexual assault survivors because of the related medical treatment, according to CNN. Trumpcare could once again allow companies to treat either issue as a pre-existing condition.