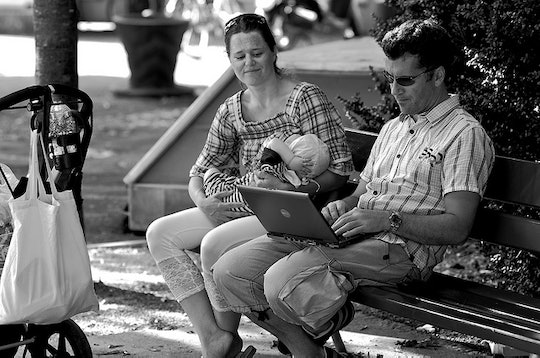 9 Questions Never To Ask A Woman Who Is Breastfeeding

The women I know care less and less about what people think if they breastfeed in public, and that's stirring up a lot of reactions of all kinds. Some of the videos floating around of social experiments involving breastfeeding in public are downright sickening. I swear, people should be given a list of questions never to ask a breastfeeding woman.

Because guess what? Moms who choose to breastfeed in public aren't doing so to offend anyone. They're not doing it so that people can ogle their boobs or feel uncomfortable. Hell, they're not even thinking about any of you. They're trying to feed their babies, who are f*cking hungry and shouldn't be deprived of a basic human right: being able to eat.

So the next time you're considering going over to a breastfeeding mother and asking if she really needs to expose herself like that, do yourself a favor and really consider the alternatives. Maybe she doesn't have a car. Maybe her baby is just going to freak out if she tries to cover up. Maybe she doesn't want to be surrounded by fecal matter as she tries to get her newborn to latch in a dirty toilet stall.

All humans have rights, especially when it comes to the necessities of life. I'd like to think that a baby's right to eat when hungry supersedes your right to not feel offended. Here are nine questions you should never ask a woman who is breastfeeding: