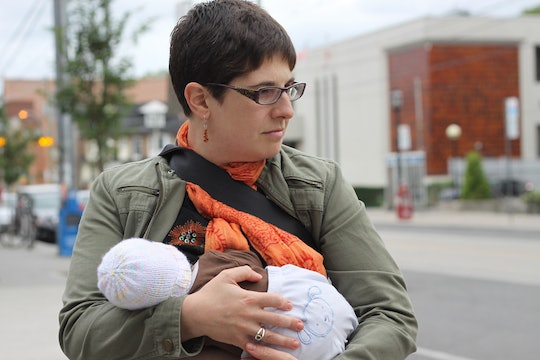 As a woman, I'm no stranger to sexism. It's sad to say, but learning how to deal with, come to terms with, or circumvent sexist behavior seems to be engrained in nearly every woman. Whether it's subtle, sexist comments that we can't help but notice or obviously sexist things that no one should ever say to a woman, we've all been there and we, as women, have all heard sexist comments that force us to either stand up and deal with or ignore the sexism that plagues our culture.

But, I'd be very quick to argue that breastfeeding (especially publicly) subjects a woman to more sexist shit than any other act she may partake in. When you expose a portion of your body that an entire culture has deemed sexual, and therefore, somehow bad, in order to sustain another human being's life, you're opening yourself up to judgement, shame, and sometimes outright torment. Far too many people feel entitled to comment on a woman's body, and the choices she makes for and with it. Breastfeeding is a choice (and a specific ability, because there are many women who choose to breastfeed, but sadly can't) and it is one that others have decided to disagree with.

And that disagreement has left others saying horrible things to women who breastfeed; shaming them and judging them and making them (or attempting to make them) feel bad for a very natural, very necessary act. It's disgusting that society has become so entitled as to shame women for their bodies and the choices they make with them. It's embarrassing, that we are all part of a society that believes it has the right to dictate what women do with their bodies (and when and where and for what reasons that woman should do or not do whatever thing involving her body).

It's beyond time that this becomes a thing of the past, and the first step in fixing any problem is admitting one exists. So, with that in mind, here are eight reasons why breastfeeding subjects you to more sexist shit than almost anything else.