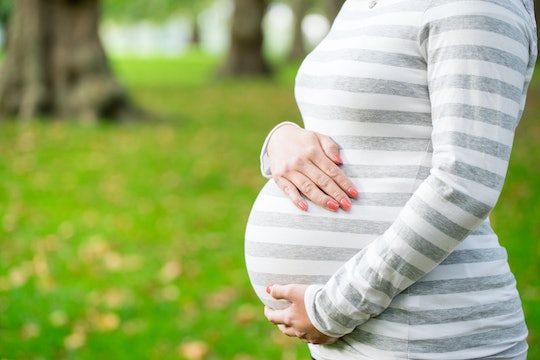 Why Saying "You're Def Having A Boy" Is Insulting

There's something about pregnancy that apparently invites people to make inappropriate comments. Pregnant women get asked if their baby was an accident, subject to rude remarks about their changing bodies, not to mention unwelcome hands on their bellies. But what really gets to me is the general public's obsession with the gender of unborn babies. There are several reasons why saying "You're definitely having a boy" is so insulting.

I've grown a lot in my understanding of gender so, knowing what I know now, I might not have found out the sex of my baby. However, this was two years ago, and I did. My midwife performed an ultrasound and told us we were very likely having a girl. I was undeniably excited. I picked out a family name for her and a gender neutral nursery theme. People started to buy us "girl clothes," and I was OK with that as long as I had some balance to the pink. I didn't do a gender reveal party, because something about it didn't sit right with me personally.

When I was eight months pregnant, I traveled across the country for a dear friend's wedding. I treated myself to a pedicure, only to be told by my nail technician that I was actually having a boy and she was never wrong. Another wedding guest told me, "I don't know what to tell you. I carried out in front like that and I had two boys." Both of these comments really got under my skin, so much so that the first thing I checked when she came out wasn't for ten fingers and ten toes.

I am completely aware that this is ridiculous. It shouldn't f*cking matter. I'd like to think of myself as a badass gender warrior, but the unsolicited commentary really threw me for a loop. So in the interest of progressive thinking about gender, keep your boy or girl opinions to yourself.