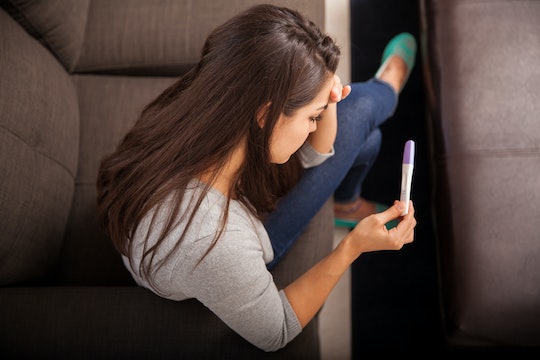 I was never really eager to have children. I figured one day I would, only because that's how the world was presented to me: women just, you know, get married and have children. I wasn't in a rush, though, which is why I was surprised when I got pregnant a year after I got married. That pregnancy wasn't unintentional, either: I suddenly really wanted a kid. I made many promises to myself and to my husband when that pregnancy test showed positive, but there were certain private and silent promises I made to my future child when I found out I was pregnant, too. When that line turned blue, I knew my life was forever changed. I knew my responsibility was no longer to myself, but also to my unborn baby. I knew I would have to make changes in how I approached the world, my relationships, and myself.

If I'm being honest, I must admit that I temporarily lost the ability to form coherent sentences when I found out I was growing another human being inside my body. I suddenly became obsessed with figuring out how I would tell my parents and friends. For a minute, or two, everything around me came to a halt and I was the only one in motion. And then, once I stopped moving, everything else started spinning, as if there was a game of "catch up" happening in the space-time continuum. When I was finally able to think, I panicked. "Am I even cut out for this?" "What was a I thinking?" "I still feel like a kid myself." "I want my mommy!" The thoughts lingered like a recurring nightmare until I found myself pacing back and forth around my apartment.

When I got used to the idea of becoming a mother, a few hours later and after talking to my husband (who was way more rational and leveled), I started picturing what kind of mom I would be. Would I be like my mom? I sure hope so. But could I be an even better mom? I knew I'd try. So, I made the following promises to my unborn child; promises I had hoped I'd be able to keep: