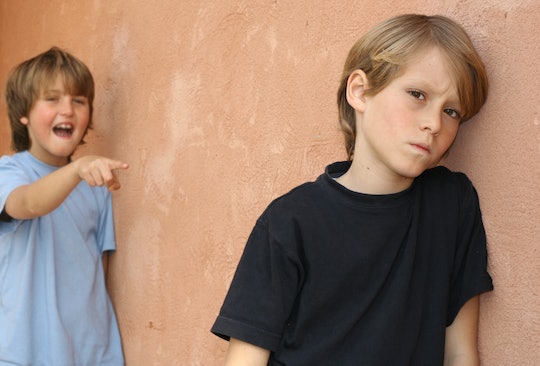 9 Things Feminist Moms Tell Their Kids When They're Being Bullied

If there's one thing about having kids in school that I haven't been looking forward to, it's dealing with bullying. Knowing what to do when your kid is bullied is never easy. I have grappled with what I should be telling my daughter if and/or when she is ever bullied. Should I tell my daughter that if someone hits her, it's OK to hit back? Is that allowed? Should I be promoting kindness and, if I don't, am I dangerously close to giving her permission to hurt others? Am I putting my daughter in more danger if I tell her not to defend herself? Also, I mean, she's so tiny; who could she hurt? Would hitting someone back even help? Hurt? Do anything productive or helpful in an already contentious situation? I feel like it's her right to fight back, but I also feel conflicted. As a feminist who has stood up for what she believes in on social media, I know what it's like to be bullied and I want my children to feel empowered, not victimized. Still, I know that violence doesn't solve anything. And round and round my brain goes, totally not knowing how to handle this complicated and complex issue.

Bullying, in a nutshell, is about intolerance, oppression and exclusion. A child may be bullied because they're overweight, they express themselves differently, they've physically developed early, or they don't fit into traditional and widely accepted gender stereotypes. I feel like it's my job, as a feminist, to fight for equality and fair treatment of all marginalized people, regardless of their orientation, physical attributes or preferences.

I have seen some rather questionable behavior among some my daughter's classmates. What starts out as a play fight can quickly turn into full-on aggression if it's not closely monitored. For example, kids suddenly start claiming parts of the monkey bars as their own, and prevent others from joining in. It can lead the youngest to come crying to their parents, and I'm fully aware that this is just the beginning. So, I am already considering what I will say to my daughter, should she start getting bullied, which will definitely include these nine things: