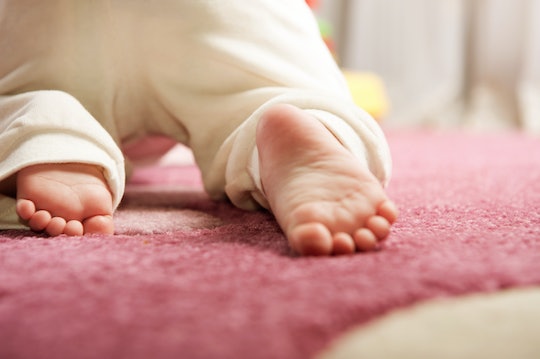 How I Felt When My Baby Hit Her 8 Month Milestone

When my husband and I met our daughter in the NICU when she was 3 days old, we were overjoyed. We were also nervous. We knew she looked perfect to us, but we were also told some scary things about the lack of prenatal care she had before she was born and some conditions they were worried about. So, honestly, it all sort of underlined my excitement, pride, and relief when my baby reached her 8 month milestone.

My daughter met her first few milestones around the "right" time: she rolled at about 4 months and started sitting around 6 months. However, none of those previous milestones felt as monumental as her 8 month milestone when she started scooting and crawling. She first started doing little push-ups and scooching backward, usually landing herself stuck under the couch. When she finally got going with a proper crawl, we were beside ourselves that she had figured it out all on her own. Watching her learn something new and complex — that gave her freedom and movement — was an exhilarating relief. It was an indication that she was going to be trucking around on her two feet and that we could relax and let her learn at her own pace.

Milestones are tricky because, while you know rationally that kids learn at different paces, as a parent you want your kid to at least tick the box so you can know they're developing as they should. It's hard to be patient, and even harder to be patient when there's the extra pressure of potential difficulties raised from the start. What a wonderful relief for these proud parents.