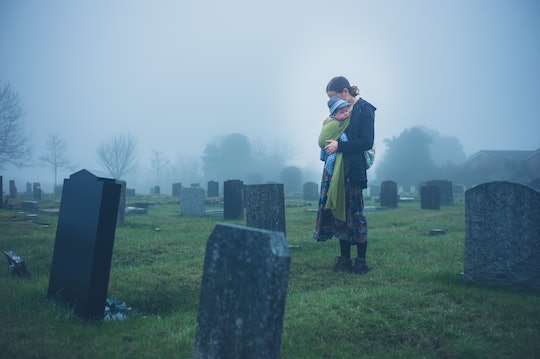 9 Things I Wasn't Ready For When My Own Parent Died

It was the weekend after Thanksgiving when my mother and I had enough information to locate my biological father. I'd been looking for him for years, to no avail. Through my painstaking multi-year journey he'd gone to Yellowstone to work as a chef, Poland to teach English to students, and everywhere except where I needed him to be. By the time I found a working phone number to contact him, everything I dreamed of one day experiencing shattered. Of the things I wasn't ready for when my own parent died, the biggest was, and always will be, that I never had the chance to say hello again. Or even goodbye.

I don't have any photos of my father and I together, but I wish I did. When I was young I only spent time with him sporadically, so there was never a regular schedule or routine that involved my dad that I could rely on and look forward to. It's not that he didn't want to be in my life, because he did, it's just that he wasn't allowed to and often refused to put me in the center of the already volatile situation that accompanied my parents' split. He stood down when it came to arguing with my mother, hoping it might protect me. He didn't realize that in doing so, he was actually destroying me.

My story, however long and winding, is a complicated one. I still grapple with the past and things I can't change. Throughout most of my life my existence has felt like a mistake. My father had been treated like a bad decision, and life with the father who raised me (and the brother who's biologically is) wasn't just hard, but sometimes impossible. I spent an unnecessary amount of time dissecting my identity, wondering where in the world I fit. Because of the clear privilege my brother received and the daily micro-aggressions I endured, finding my father was a necessary part of closing the identity loop. I had to know my father so I could feel like I mattered, too.

So he news of his death felt like I, too, had died. I hadn't prepared for the possibility that he might not be alive, or considered the fact that I might never find him. I needed answers about who I was so badly that I was completely blindsided by the news of his passing. He had died four years before I made that devastating phone call, but the news was new to me and I went into shock as a result. Sometimes it's still shocking to think about the undeniable fact that I live in a world that doesn't have my father in it.

The day I found out my father had died regularly plays on repeat in my mind. I wish we'd had the chance to mend some of the broken pieces. Not just mine, but his, too. I just wasn't ready for the news, and in so many ways I will never be ready to face day after day knowing my father is no longer here. Perhaps that's why the saying "death is only the beginning" tends to stick to the inside of my ribs, like a bad ache: for me, my father's death was the beginning of feeling the following things over, and over, and over again: