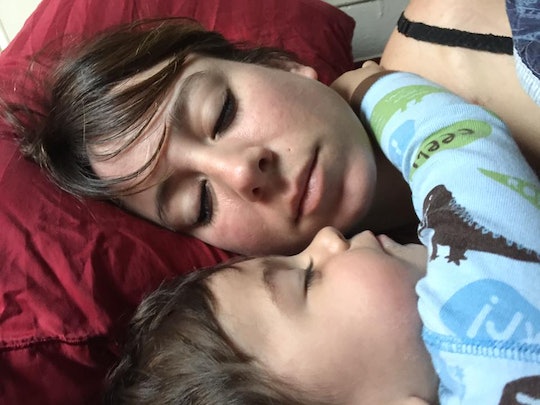 Growing up with a toxic parent shaped my thoughts on parenthood in a profound and seemingly unshakeable way. I didn't want to become the toxic parent I had survive so, in an attempt to ensure that wouldn't happen, I was adamant about never becoming a mother. Then, of course, I changed my mind and had a baby. While my outlook on motherhood and my choice to enter into it changed drastically, my commitment to never becoming a toxic parent, didn't. I might have used my past as a reason why I never wanted kids, but now, having a toxic parent is why I have the strongest relationship with my kid.

Everything I learned as the child of a toxic, abusive parent (every painful lesson that was forcibly taught through mental, emotional, verbal and physical abuse) has made me a better parent to my son, and ensured that the relationship we have will never mimic the broken relationship I had with my toxic parent.

Of course, this isn't to say that only people who grew up with a toxic parent have strong relationships with their children. Having a less-than-desirable childhood is in no way a prerequisite for successful parenting. However, when you grew up with a toxic parent, you are so passionately adamant about creating a childhood for your kid that was better and safer and, simply, more loving than your own. You want to give them everything you never had; you want to experience a close parent-child relationship that you never had a shot at experiencing; you want to ensure that they see you as a trusted ally, a loving parent and a constant source of support, instead of someone to fear and, eventually, resent. You will fight for all of these things for your kid, because you didn't have them yourself.

Which is why these eight reasons people who grew up with a toxic parent have the strongest relationship wit their kids, exist. Just because it happened do you, doesn't mean it has to happen to anyone else, ever again.