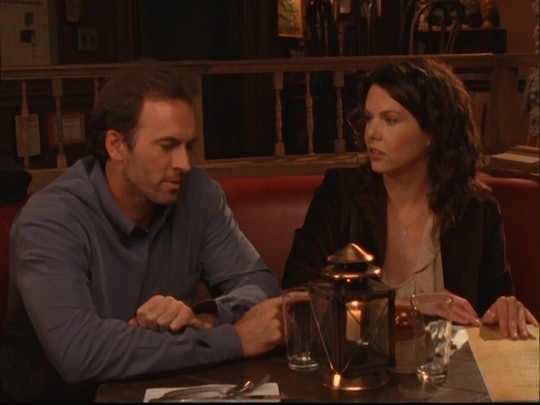 9 Things Single Moms Say On First Dates Vs. What They Actually Mean

The thing about figuring out how to date when you're a single mom is that it is exactly as simple, and exactly a boiling-hot messy as dating before you became a mom: you find someone you want to go out with, you somehow mutually express an interest in auditioning for one another over tapas, and then you spend the days and hours leading up to the date desperately trying to hide your profound shortcomings as a human being with Spanx and contouring. When you finally meet up, you get drunk enough to stop the impulse to rage-cut your bangs over the joke you made in the first 5 minutes that totally didn't land. Then you get several degrees too drunk to functionally exist in public. Then three years later, you look back and realize that you were kinda awesome that night and the other person was having a panic attack about what to do with their elbows. So, like, being a person and trying to find someone's hand to hold while we're being mercilessly flung toward unknowable darkness is exhausting all around.

That's what happens when you make a date, whether you're a mom or not. The similarities largely stop there.

There are some aspects of being a parent that actually make you far more effectual and healthy about dating: Most of us are more aggressive about maintaining good boundaries around our kids and their space than we ever were about maintaining them around ourselves, thus making us far more likely to proceed in new relationships at a slower, more even pace (you know, like we always knew we should've been doing but neglected to do at all once we actually met someone we wanted to never get out of bed with).

It's a well-established truth that no one is ever their real selves on the first few dates. We all send our representatives on those dates: the shiny, charming, curated, calculated approximations of who we'd ideally be if we ever got our shit together, which none of us will ever really feel like we have, but maybe in the meantime, our dating representative will lure in some unsuspecting sucker and trick them into loving us, and then by the time they realize the unsightly mess we really are under unflattering light, they'll be too far in and will just stick around becauseOUT of pure inertia. Basically, while dating, everyone feels like an ill-advised timeshare property, and we're all just hoping that by time someone realizes we're a faulty wreck that they never should've bought into, it'll feel too complicated and annoying to get out of, so they'll just stick with it.

To be clear, this is true of everyone. Not just single moms. Like, we are all essentially trying to gently scam every person we've ever been on a date with. That's OK. It's called romance. It's fine.

For single moms, the representative we send is almost always the same: A mom, but not someone who is solely defined by being a parent — someone who doesn't talk about our kids very much but who says all the right things about them when we do. And for the record, "all the right things" means anything that implies the final, and most crucial, quality a single mom's dating representative needs to possess: Being the world's best mom, but also someone for whom having a kid somehow magically doesn't interfere with the ability to enjoy all the fun, carefree perks of a kid-free lifestyle. Like, you don't want your date the think you're a shitty, negligent parent, but you definitely want to make it look like having a kid doesn't make you a tied-down bore who can never do anything.

Anyway, all people who are dating are all nothing more than freshly showered vessels of high-octane lies, and nothing we say on a first date is ever what we really mean (except the part where we order more drinks). Here are the ways in which single moms, in particular, are filling their dates' heads with bullshit with blissful abandon.