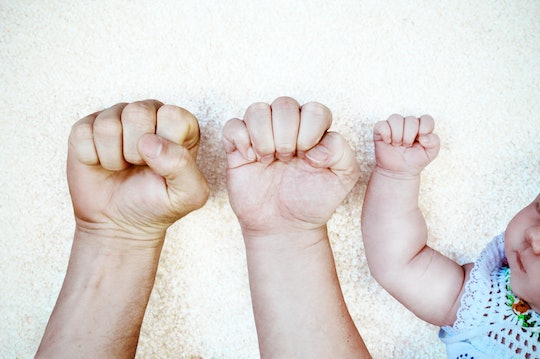 If you frequent the feminist side of the internet (god-speed), chances are you've heard the term "sex positive" discussed on a regular basis. You may also catch yourself wondering what sex positive even means, and what it means to be raised by a sex positive mom. I mean, honestly, what is sex positive? What does it mean to be a sex positive mom? What does life mean, in general? (Okay, please don't answer that last question because, really and truly, no one wants and/or is ready for the answer.) I suspect this entire sex positive movement is much simpler and probably less sexy than many people would like to imagine. Sex positive doesn't mean that you're running off to participate in as many orgies as you can with as many people as you can (although, if you are, that's cool too). Instead, it simply means that, as long as everyone involved in a sex act is willing, safe, and having a good time, then it's good to go and the "going" is amazing. Which is why it should come as no surprise that sex positive moms raise kids who are awesome at life.

"But how?!" some of you might say. "You can't talk about S-E-X with children!" Well, I would counter that statement with the fact not only are there lots of ways you can lay the groundwork to discuss sex with children at an age appropriate time. Furthermore, sex positive moms realize that their children are very quickly going to become adults and that while they don't want to push them to grow up to quickly, they still need to equip them with necessary knowledge so they'll become an informed and well-adjusted (hopefully) adult. We only get our proverbial mitts on our children for a little while before we have to send them off into the world and let them figure their own stuff out, and there are some things they shouldn't have to figure out on their own (or by, potentially dangerous, trial and error). A lot of this stuff can and should be explained to them by their parents.

Which is why children who were raised by sex positive moms often have a leg up in life in these nine totally awesome ways, and they use that leg to kick ass.