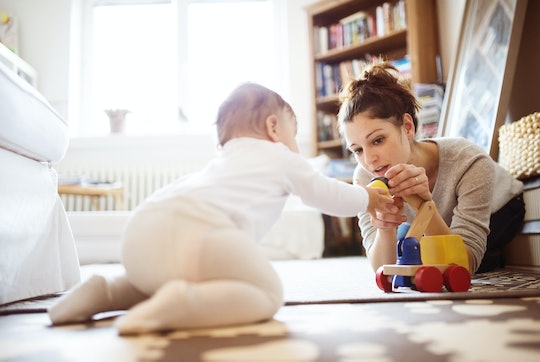 9 Ways Being Sex Positive Prepares You For Toddlerhood

Ever since I was 13-years-old and secretly listened to a call-in radio show about sex, dating, and relationships, how society talks about sex has been massively important to me. In college, I became acquainted with sex positive feminism and, well, that's all she wrote, so-to-speak. Maintaining inclusive and safety-oriented ideas about sex and sexuality reaches into every aspect of who I am, and that includes how I approach motherhood. Turns out, it's helped me navigate parenthood in ways I couldn't have imagined it would. In fact, I'd unequivocally say that being sex positive prepares you toddlerhood really well.

Here's something some people don't understand about being sex positive: a lot of the time the "sex" part is completely secondary to the larger points of respecting others, respecting yourself, and safety. Someone who identifies as sex positive isn't just some lascivious wood nymph flouncing about in sheer lingerie banging anyone who crosses her path. (Or maybe she is: I don't know her life.) Most of what sex positivity ultimately boils down to, in the parlance of our generation, is "You do you (particularly in the boudoir) as long as you're safe and you have consent from the people you're doing you, with."

Now, obviously, the boudoir aspect of sex positivity isn't going to be front-and-center when applying sex positivity to parenting, at least not when it comes to toddlers. That doesn't mean, however, that this overall philosophy can't influence or even guide motherhood, especially motherhood with a toddler. For example...

More Like This
17 Best Potty Training Products For Toddlers
From Captions To Gifts, These Are All The Kindergarten Graduation Ideas You Need
Katrina Scott On Being First Pregnant Model In Sports Illustrated’s Swimsuit Issue
Ashley Graham On The “Fun, Organized Chaos” Of Raising Twins