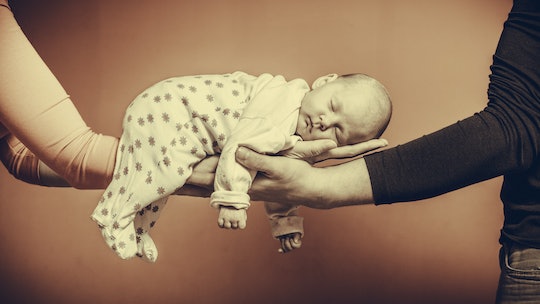 Ahh, the newborn years. Now that my kids are older, I can't say I miss them because, well, I don't. I mean, I guess I do miss the baby snuggles, that special newborn smell, and the sweet cooing, but that's about it. In theory and in the beginning, the newborn years seem serene until, of course, the reality of parenthood sets in. The stress, fatigue, and overall sense of, "What the hell do I do now?" can take their toll. Now that I'm long past it, I see all the ways the newborn years almost ended my relationship. Key word, thankfully, being "almost."

Throughout my first pregnancy and before my daughter entered the world, my partner and I declared our infinite devotion to one another, as two crazy kids in love often do. We did the birthing classes, read the books, continued date nights, and swore we'd always put one another first, no matter what. Ha. We were naive. I mean, yes, we were in love and we had wonderful goals, but we were definitely naive. We had no idea how much control our newborn would have over us both, or how much we'd be tested in the first years of her life.

I wouldn't trade the time, no matter how hard it felt, for the world. However, my partner and I had to find new ways to communicate, connect, and understand one another. These aren't bad things, no matter how difficult they were initially, and I'm actually grateful to be where we are because of all we've been through together. Still, there were some arguments that made me think we wouldn't make it to our daughter's first birthday. Here are some of the ways having a newborn almost ended our relationship before it ever really began (we're still going strong, 13 years later).

More Like This
Gathre’s Winnie The Pooh Collection Is Finally Here
Double Your Fun With These Instagram Captions For Twin Pics
Sex And Mom Guilt: When I Date Someone New, Am I Cheating On My Kids?
When Can Babies Hold Their Head Up? Experts Explain