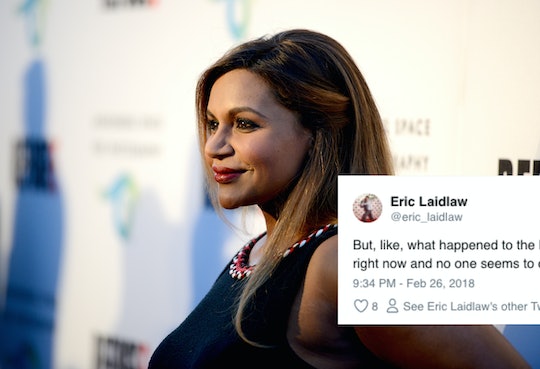 A Fan Epically Trolled Mom-Shamers On Mindy Kaling's Photo, & It Was Brilliant

It looks like 2018 could well be the year of Mindy Kaling. Not only does the writer and actress have a new show on the horizon (praise be, because now that The Mindy Project has ended I wasn't sure what I was supposed to do with my life), she also stars in A Wrinkle In Time with Reese Witherspoon and the actual Oprah Winfrey. Oh, and let's not forget that she recently became a mother for the first time as well, as noted by this fan who epically trolled mom-shamers on a photo of Kaling. You know, just in case anyone was planning on coming for her with those old-fashioned tropes of "where is your baby?" etc.

Kaling gave birth to her daughter Katherine Swati Kaling back in December. She has been reticent about sharing any pictures or information about the 2-month-old little girl (who is named after Kaling's mother) on social media, and seems to have developed a real talent for keeping her personal life private. Which naturally means fans are more curious about her than ever before. Especially now that Kaling is heading out to promote her hotly anticipated movie A Wrinkle In Time. Kaling shared a photo of herself getting ready, and fans were super excited.

When Kaling shared the photo on Twitter, one fan seemed to be mom-shaming her with one of those stereotypical comments about leaving her baby behind. Eric Laidlaw wrote:

But, like, what happened to the baby? He should be in school right now and no one seems to care.

While some people might assume that Laidlaw was trying to mom-shame Kaling, this is not the case. Serious fans of The Office, which Kaling co-wrote and starred in alongside Steve Carrell and B.J. Novak, might recognize this as a decently obscure reference to the show. It's a line from the final episode in 2013, in fact, when Ryan (played by Novak) arrives at a wedding with a baby in tow to reconnect with Kelly Kapur (played by Kaling).

A few people thought the comment was legitimate before the fan set them straight, and that's what's so great about it. Laidlaw responded to people who thought his comment was serious:

Guy [sic] here - it’s a reference to “The Office” finale. Ryan passes a random baby off to Kelly and her new boyfriend, before leaving the baby with him and running off with Kelly. Really funny part of a great show :)

If you aren't a fan of the office, Laidlaw's mom-shaming comment seems like something you'd encounter any day on Instagram or Facebook. (Both Chrissy Teigen and Beyoncé have been shamed for "leaving" their babies and going out for a night with their husbands.) And that's what makes it so incredible — it's the perfect Office fan throwback, and it also trolls all the mom-shamers who think mothers shouldn't ever leave their child's side or their homes.

For the most part, fans seem to be embracing pretty much everything about Kaling wholeheartedly. While there have been plenty of celebrity moms (and non-celebrity moms as well, of course) who have been forced to bear the brunt of mom-shaming for the choices they make, fans took to Kaling's picture with messages of love and compliments for both her and her tasty-looking meal in the background.

Kaling has far too much on her plate at the moment to be dealing with the likes of mom-shamers, so it's a good thing people aren't bothering her. Between A Wrinkle In Time, her new show Champions, her baby and dealing with her amazing baby gifts from Oprah (a hand-carved bookcase that arrived via U-Haul because it's that impressive), Kaling is a busy, happy camper... who apparently isn't getting much sleep. She opened up during a recent interview with Entertainment Tonight about the best thing her daughter Katherine does; a little thing called sleep.

The best thing my baby has been doing lately is sleeping. She doesn't love doing that, she loves not sleeping, but when she does, it's very fun. I'm busy right now but when I see her and get her to smile first thing in the morning, oh my god. It's the best feeling.

I'm so glad that a fan of Mindy Kaling's used a Kelly Kapur reference to highlight how foolish mom-shaming really sounds. That might not have been his intention, but it certainly felt like the result.