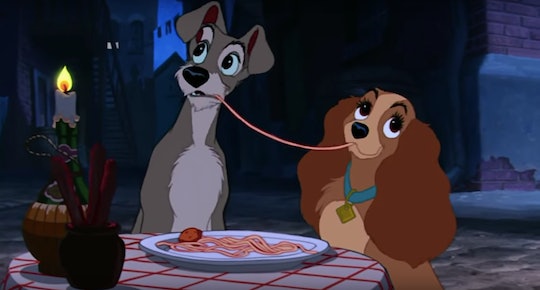 Get Excited Disney Fans, Because 'Lady & The Tramp' Is Getting A Live-Action Reboot

It's the year of reboots, remakes, and renovations, it seems. Everything from classic television shows like Roseanne, to 1980s cult favorites like Heathers and Overboard are all getting the modern treatment lately. Now, a Disney favorite is also getting a reboot with the news that a Lady and the Tramp live-action remake is in the works, according to E! News. But... there's a slight catch: You won't be able to take your kids to the theater to catch it on the big screen or use your favorite streaming services like Netflix and Hulu to watch it.

Disney's remake of the 1955 classic will be released exclusively to its upcoming streaming service, according to Cinema Blend. The outlet reported that the remake will be a mixup of live-action and CG special effects (probably for the sake of that famous spaghetti scene). Disney's streaming service is expected to launch sometime in 2019, according to Forbes, meaning that the new Lady and the Tramp will (hopefully) hit the platform shortly after. So, you probably have about a year or so to wait, unfortunately.

Disney has been busy lately remaking some of its classic, like Mary Poppins with the upcoming remake starring Emily Blunt and the 2017 version of Beauty and the Beast, which was such a smash that Disney's decision to update Lady and the Tramp is actually right on-par with the company's current trends. But, both of those films were released to theaters and this latest project will be a streaming-exclusive, so fans will just have to be a bit more patient to see their favorite pups again.

While there are still relatively few details about the upcoming film, The Hollywood Reporter has confirmed that Charlie Bean, who directed The Lego Ninjago Movie, will be also directing the Lady and the Tramp remake.

Now, in case you aren't familiar with the original Lady and the Tramp, here's a quick refresher: The animated movie follows the unconventional love story between a pampered pooch named Lady, the cocker spaniel, and, of course, the Tramp, a more "of the people" street dog.

The two embark on a love story for the ages, as they defy stereotypes, stick up for their friends, and eventually start a family of their own.

Given the canine subject matter, some expressed their confusion on social media as to how the new film would play out. Of course, talking dogs aren't real, but with CGI technology and a determined team of filmmakers, almost anything is possible.

Just look at the beast from Beauty and the Beast. Impressive, huh?

Because, really, that classic scene better be making its way to the new version.

Additionally, it's unknown whether the classic songs from the original film will be making their way into the reboot. The 2017 version of Beauty and the Beast, for example, did an incredible job of maintaining the film's classic tunes.

"Bella Notte," along with "He's a Tramp" and "The Siamese Cat Song" are all beloved moments in the 1955 version, so hopefully the new movie will pay some kind of tribute to them at the very least.

Also unknown about the new movie? The cast. The titular characters will probably be voice actors for their CGI counterparts, but they're still pretty big roles. After all, when it was announced that the remake of Disney's The Lion King would feature Beyoncé and Donald Glover in starring voice roles, the world was collectively shook. Also, the humans who own Lady and the other pets in the film will probably need to be cast as well. Of course, that's all up in the air and those behind the remake clearly have a lot to do.

For now though Disney fans can rest assured Lady and the Tramp is getting a reboot and with a classic like that, it can only be awesome.