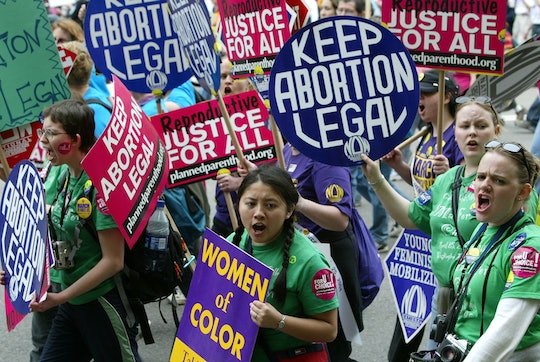 Does This Law Help Or Hurt Grieving Moms?

My breasts were tender, my energy was depleted, and I had a slight yet powerful wave of nausea. All the signs pointed to one conclusion: I was pregnant. My partner and I were trying for our second child, and we were thrilled to discover my suspicions were correct when I took a positive at home pregnancy test. But our joy was fleeting. I miscarried two weeks later.

I was sad, but to be honest, part of me was also relieved. My response to my pregnancy loss was complex, and not necessarily what I would've expected. And truth be told, there's a wide range of emotions a woman can experience at any point during a pregnancy, whether it's planned or not.

I was reminded of my mixed emotions about my pregnancy loss when I heard about a new Florida law that would issue birth certificates to parents whose pregnancies ended in miscarriage. While presented as a bipartisan bill to comfort grieving mothers, upon closer inspection it appears to be part of an ongoing attempt to strip women of their reproductive rights.

According to the Grieving Families Act, which is championed by Republican Rep. Bob Cortes, parents whose pregnancy ended after nine weeks and before 20 weeks of gestation will receive a "certificate of nonviable birth." The certificates are made available as public record, and parents can provide a name and gender of the miscarried fetus. Rep. Cortes claims the bill is not partisan, and it will play "an important part of the grieving process." In an interview with the Associated Press, Democratic Sen. Lauren Book agreed, stating that the bill "gives families that are grieving during a very difficult time some closure."

To be fair, the certificates are only available upon request, meaning that they are not required to be issued to mothers who lose a pregnancy. But while the bill might be helpful to grieving parents in theory, reproductive rights activists are skeptical. Mary Ziegler of the Florida State University School of Law told local news station WFSU that the bill is "part of a kind of incremental strategy to establish fetal rights that in the long-term could pose a threat to legal abortion."

In the midst of an ongoing attack on reproductive rights that includes states mandating burials for aborted fetuses or threatening to jail individuals who drive women to abortion clinics, the bill can be viewed not just as a comfort to grieving parents, but as one of many attempts to establish personhood in the hopes of denying women reproductive freedom.

This is far from the only bill of its kind. States like Ohio, South Carolina, Mississippi, and Indiana have already tried to mandate aborted fetal burials, legally requiring women who choose to terminate their pregnancies to pay for cremations or burials of fetal material. Arkansas and Georgia already have similar statutes already in place, essentially prohibiting women and abortion clinics from donating fetal tissue to medical research. Such bills are predicated on the idea that fetuses are human from the moment of conception, and that every woman who loses a pregnancy, regardless of whether she wanted to terminate or not, should be forced to grieve the loss.

There's a widespread belief that women can and should only have one emotion related to pregnancy loss, and that emotion should be grief. But the reality is so much more complicated than that.

Issuing a birth certificate to a miscarried fetus that was never born might help some women grieve. But it also poses a threat to women's reproductive rights by establishing personhood at the early stages of gestation. Perhaps more importantly, the bill is predicated on the belief that women can and should only have one emotion related to pregnancy loss, and that emotion should be grief. But the reality is so much more complicated than that.

As a woman who has had an abortion, lost multiple pregnancies, and given birth, I can say with the utmost certainty that there is no "one way" to respond to pregnancy, pregnancy loss, or childbirth. With a positive pregnancy test in my shaking hands, I was both excited and terrified, unsure and steadfast in my decision to be a mother. And during my miscarriage, I felt both sad and relieved that even though I wanted to have another child, that time wouldn't be now. I wouldn't have to navigate the difficulties of parenting two children while working, and I wouldn't have to go through another potentially high-risk pregnancy,. My life would stay the same.

When it comes to pregnancy, there is no one narrative that defines all women's experiences.

None of those reactions to my pregnancy or my pregnancy loss were wrong, per se. They do not make me a bad mother, a bad woman, or a bad human being. They are just a few examples of an endless range of emotional responses that women can have to pregnancy. Regardless of what Florida legislators might think, not all women who get pregnant want to have a child, and not all women who lose a pregnancy feel bad about it. A reported 95 percent of women who have abortions do not regret them, and even many women who lose a wanted pregnancy don't feel sadness as much as they feel guilt. "It calls into question your whole identity," one woman told New York Magazine's The Cut about her miscarriage. "Like, I’m not a proper woman, I can’t keep a pregnancy, what kind of sh*tty human being am I?"

In my 30 years of life, I have gotten pregnant a few times. I've had an abortion, a taxing labor and delivery, and more than one miscarriage. My complicated feelings about each pregnancy outcome prove that when it comes to pregnancy, there is no one narrative that defines all women's experiences.

The Grieving Families Act, and other like-minded bills, establishes a narrow, prescribed relationship women should have with their pregnancies. It perpetuates the sexist trope that all women want to be mothers first, foremost, and always. It fortifies the notion that every woman will face the loss of a pregnancy the very same way, stumbling through the stages of grief and in need of some sort of reprieve. It positions motherhood as less of a choice and more of an inevitability, telling women that if they are not devastated by a miscarriage, they're intrinsically defunct, all the while attempting to establish legal personhood that would give a fetus more rights than the mother.

Women are more than our ability to reproduce, and while we must continue to support those women who do suffer through miscarriage, we must also be willing to support those women who do not see a pregnancy loss as cause for suffering, but as a welcomed grace. If we are to champion motherhood as a worthwhile life choice, we must also be willing to celebrate those who choose not to become mothers, or those who want to become mothers but are unable to do so. Most importantly, we must remind women that any time they see a positive pregnancy test, or any time they are faced with the loss of a pregnancy, there's no one "right" way to feel about it.

More Like This
7 Baby Name Generators To Try
Festive Mommy & Me Holiday Nail Ideas To Try
The “Tripledemic” Is Scary, But I Feel Less Helpless When I Wear A Mask
101 Advent Calendar Activities, From Books To Read To Cookies To Bake