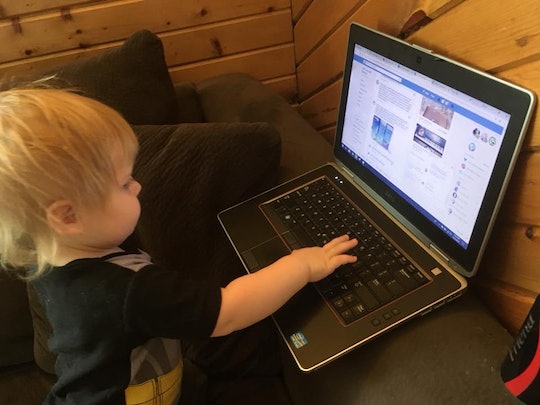 If you're a parent (or even just a human who uses social media), you've probably heard a thing or two about screen time. It's pretty much universally regarded as something bad for kids, or something that lazy parents use in replace of actual parenting. Hell, I used to scoff at the idea of handing a kid an iPad or a tablet. But then I actually had kids, and actually watched them enjoy screen time together, and over time I realized that screen time brings my family closer together. What I had once considered "evil" facilitates so many lovely family moments that I know I will treasure forever.

It took me a while to reach this realization, though. When my daughter was a baby I was adamant that I would never let her have a single second of screen time as a toddler. At the time, the American Academy of Pediatrics (AAP) recommended no screen time before age 2, and limited screen time after that. I was on board with their recommendations, and rarely, if ever, let my child watch a television screen or hold a tablet. Sure, she would passively catch whatever was on TV, but it wasn't a constant in our home or in my daughter's life.

Then I found out I was pregnant with my second baby when my daughter was 2. Thanks to my horrible morning sickness and relentless fatigue, I was desperate for a break. And that's when "it" happened: I discovered Curious George on Netflix. In a short amount of time I grew to rely on our TV break time, and was thrilled to learn that my daughter loved that time, too. I started to think that maybe screen time wasn't as bad as people on the internet made it out to be. After all, it was kind of saving my pregnant life.

After my son was born I decided to limit my daughter's screen time to an hour of educational programming a day, just like the AAP website recommended. But one morning I found myself watching a cooking show and, without prompting, my daughter started watching the show with me. So our routine changed again, and every Saturday morning I let her sit next to me in the kitchen and watch HGTV or The Food Network. And you know what? We had fun. We painted the kitchen walls red and baked cupcakes together, following along with the shows that facilitated this special bonding time.

Everyone looks forward to family movie night because everyone can take part and we can enjoy each other's company without the chaos that only a family of seven can experience.

When I became a single mom I relied on screens to help me take care of my kids. Hell, I'm not sure I could have survived without a television or a tablet. My kids would watch a show and play together while I cooked or cleaned, and my daughter would get rewarded with a special show if she was quiet while I put her baby brother to bed. Screen time wasn't the demon I feared it would be but, instead, a tool in my busy-parent tool box that came in handy all the damn time.

And now that I'm married to a gamer, and we have a large family consisting of five kids ages 1 to 12, screen time has continued to be a crucial part of our daily lives. My kids don't have free-reign of screens and devices all day long, to be sure, and they still have to help out the family by doing their chores. They have to play games, read, and go outside. But having an hour of screen time after homework and chores, and before dinner, has taught them that being a part of a family means working hard and playing hard. They have responsibilities, yes, but they also get to have fun doing what they want to do. And what they want to do, sometimes, involves screens.

Screen time has also brought us, as a family, closer together. I have bonded with my daughters over our love for all things Harry Potter, snuggled with my sons to watch My Little Pony, and debated plot twists in Star Wars as a family at the dinner table. Everyone looks forward to family movie night because everyone can take part and we can enjoy each other's company without the chaos that only a family of seven can experience.

Even when we incorporate screens into our daily lives my family still spends meaningful time together.

And since my husband is a gamer and loves to geek out on new (and old) video games, he has the opportunity to share his favorites from his childhood with our kids. Through the power of technology he takes our kids on adventures to distance lands, fighting bad guys and building armies and using magical powers. Some nights, the entire family will gather round to take turns and learn to play together. Even the baby will hold a controller and pretend to play, too.

Screens have also helped break up the monotony of mom life. You might think I'm lazy, but letting my kids have a little screen time has let me get what I need to get done, done. My children are entertained while I pick up the house, work from home, or simply enjoy some peace and quiet... a luxury rarely afforded to moms, and especially moms with five kids.

I'm not suggesting that moms hand their kids a remote or game controller and say "good luck." In fact, no one is. Even when we incorporate screens into our daily lives my family still spends meaningful time together. I still parent my children. I always make sure that my kids do other things that don't involve a pad or a television set. I send them outside, encourage them to build epic pillow forts in my living room, and facilitate dance parties in the basement.

But on rainy days and Sunday mornings when the kids are awake and I need a cup of coffee or two before I am ready to be a mom, I rely on screen time to keep them occupied. And when the weather is crappy I can put on a dancing challenge video game or kids fitness website, and allow screen time to help my children stay healthy and active.

So while it may be demonized and scrutinized ad nauseam, I value my children's screen time and the family time it has provided us all.