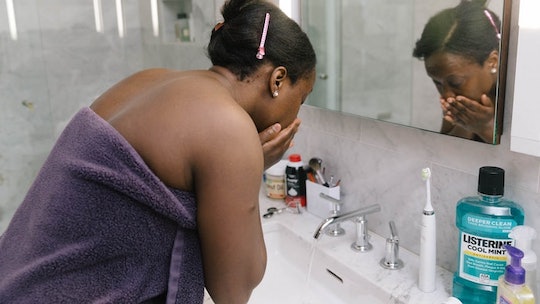 Most people have heard of morning sickness, even if they've never been pregnant. I mean, it's pretty much the stereotypical early pregnancy symptom highlighted in movies and on television. We've all seen a pregnant person throw up once or twice and complain about feeling hungover, only to later find out they're knocked up. But I had severe morning sickness and it's nothing like the stereotypical depictions we've come to expect. Instead, it's much, much worse.

Don't get me wrong, I used to think morning sickness was no big deal, too. The first time I was pregnant, I had regular, run-of-the-mill morning sickness that seemed pretty par for the pregnancy course. I felt generally nauseated during my first trimester, unless I munched on crackers or sucked on lemon drops all day, but it wasn't anything debilitating. I threw up a couple of times, sure, and I was pretty miserable, yes, but I could still function. I remember complaining to my husband and friends about it, too, thinking this was more of an annoyance than an out-and-out problem. And with my limited first-person knowledge of morning sickness, I thought this experience was the worst of it. Spoiler alert: it wasn't.

My second pregnancy taught me how severe morning sickness can actually be. I had hyperemesis gravidarum (HG), which the Hyperemesis Education and Research (HER) Foundation describes as, "unrelenting, excessive pregnancy-related nausea and/or vomiting that prevents adequate intake of food and fluids." That description really doesn't do it justice, though. Imagine being hungry all of the time, but not being able to keep anything down. For months. Then go ahead and add exhaustion, frustration, guilt, and a complete inability to function into the mix. Yep, that's more like it.

HG impacted all areas of my life. I had to care for my toddler, go to work, and try to function at a time when getting out of bed made me feel like I was going to die. I was pretty lucky, though, in that I had a great midwife who worked with me to find the right combination of medications, I.V. fluids, and safe foods to aid me in making it through what was arguably one of the worst times of my life. My friends, family, and co-workers were less than supportive about my "morning sickness," though.

"Oh, you're sick, again?" isn't a question someone needs to hear when they're dealing with uncontrollable nausea and vomiting.

Since those around me had a limited knowledge of morning sickness, let alone how horrible it could be, I heard so many condescending comments and obvious questions that seemed to only exacerbate the problem. For example, "Have you tried crackers?" is such an unnecessary question, especially when you hear it 10 times a day and often from the same person.

"Oh, you're sick, again?" isn't a question someone needs to hear when they're dealing with uncontrollable nausea and vomiting.

"Oh, it's just morning sickness?" is so condescending it's hard to respond in a way that doesn't highlight your rage. I mean, if a man threw up constantly for months, would the word "just" be used to describe his condition?

And then there was this horrible question: "Aren't you afraid those meds will cause birth defects?" Unless you are my doctor, please do me the kindness of shutting the hell up. Who says that? Who worries an already sick person with thoughts of further complications?

While most people talk about the physical side of HG, for me, the worst part of HG was how it made me feel emotionally. I felt so depressed and so alone and so misunderstood. Then I felt guilty for being depressed and alone and misunderstood when this pregnancy was one I had planned. I couldn't do most of the things I normally did to manage my mental health, like spend time with my friends, chase my daughter around, or exercise, which made my feelings all the more intense. Most days, I would end up lying on the bathroom floor, questioning my decision to get pregnant in the first place.

Most days, I would end up lying on the bathroom floor, questioning my decision to get pregnant in the first place.

Sadly, I know that I am not alone. A 2018 review published in the British Journal of Midwifery found that people with severe morning sickness often experience serious mental health impacts, including isolation, depression, thoughts of suicide, and terminating wanted pregnancies. These symptoms are felt both by people with HG (only about 1.5 percent of pregnant people), and by those who have severe nausea and vomiting but who aren't diagnosed with HG (about 30 percent). Which means that a lot of people trying to navigate the difficulties of the first trimester might not be getting the mental health care they need and deserve.

Similarly, a meta analysis of 59 studies published in the British Journal of Obstetrics and Gynaecology found that people with HG were significantly more likely to suffer from depression and anxiety. The researchers behind both of these studies agreed that the medical community needs to do a better job of diagnosing severe morning sickness, and offering psychiatric care to pregnant people. Which sounds great, but honestly, between the stigma of feeling like you are over-reacting to something that's supposed to be a "normal" part of pregnancy, and the stigma of asking for help with your mental health, that can be really hard to do.

When my husband and I decided to try to conceive another baby, I was understandably afraid that I would get HG again. I honestly didn't think I could survive another HG pregnancy. Between my older two kids and his older two kids, our life was busy. I couldn't afford to lose my job or not be able to care for our kids. In the end, our desire to have another child won. Unfortunately, I got HG again, and it was even worse than before. Even though my pregnancy was planned, and I love my baby more than just about anything, there were days when I just wanted to die. And even now, to this day and now that my baby is 1-year-old, I am ashamed to admit that.

I think it's time that we changed the way we collectively talk about morning sickness so people take it seriously and get treatment right away for their nausea and also for their mental health, too.

This time, though, I knew what I was in for. I knew that in order to make it, I needed to be honest with my provider, get medicated early, stay hydrated, and get some damn help for my mental health. I was so much worse off physically — I vomited several times a day, couldn't keep anything down for days at a time, was sensitive to light and smells, got dangerously dehydrated, and lost quite a bit of weight. This time, though, I bluntly told my OB-GYN how depressed and isolated I felt. She prescribed an anti-depressant that helped tremendously and, in the end, probably saved my life.

I survived. A few weeks after my son was born, I got my tubes tied. I don't want to risk ever getting pregnant again. It's not worth it. It's been a year since my baby was born, and I almost can't remember how bad it was. Almost. Every time I feel the least bit nauseous, it all comes back to me and I take three pregnancy tests, just in case. I survived HG, but I almost didn't. I think it's time that we changed the way we collectively talk about morning sickness so people take it seriously and get treatment right away for their nausea and also for their mental health, too.

If you have severe morning sickness or HG, you don't have to suffer alone. Your mental health matters, too. Visit the Hyperemesis Education and Research Foundation for info and support.