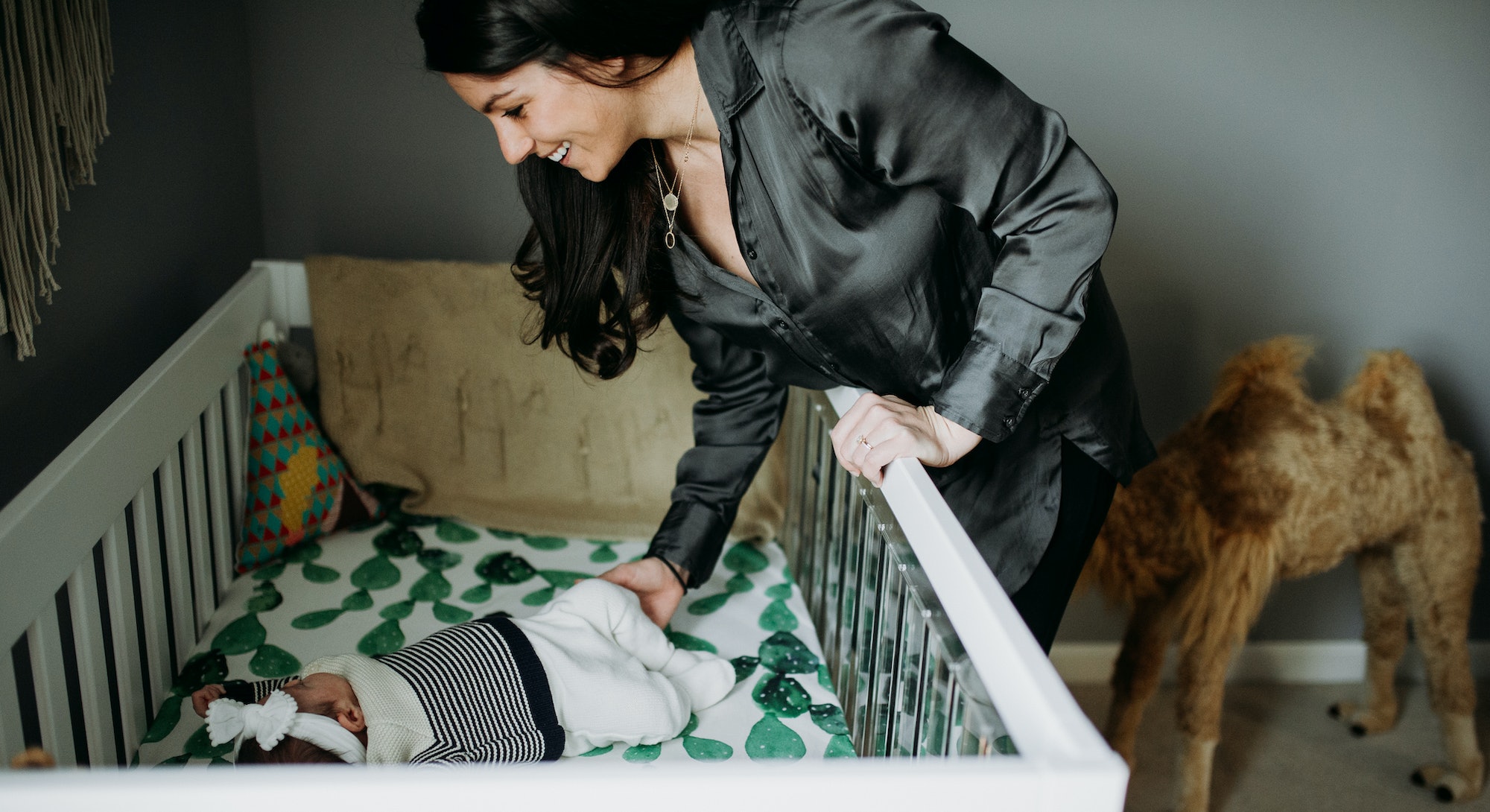 How A Born Optimist Handled The Worry That Comes With Infertility

"Whatever the opposite of postpartum depression is — that's what I have," Alyssa Himmel joked with her husband soon after their daughter Francis Sage was born. After a miscarriage, months of trying, ovulation tests, and a UTI from giving an old wives' tale a whirl, Himmel became pregnant. Her pregnancy was affected early on with miscarriage anxiety, pubic pain, and unsolicited commentary ("No baby yet? What's wrong with you?" an acquaintance asked before the pregnancy was common knowledge). But while a study in the Journal of Midwifery & Women's Health shows a correlation between infertility (specifically IVF) and a greater prevalence of postpartum depression, Himmel says she felt "just pure fulfillment and gratitude" after birth.

"I cry often just out of sheer happiness that she is actually here and ours," she tells me about four months after giving birth to her daughter. "My husband and I were surprised at the intense feeling of love we share toward her about a hundred times a day."

You're likely familiar with the storybook beginning. Mom gets pregnant, mom has baby, mom falls deeply, madly in love. But if the five women chronicling their journey trying to conceive for Romper's Trying project over the past year showed us anything, it's that stories don't always play out like that. Fertility is not a given, and past adverse experiences often echo through current experiences. Himmel's journey to pregnancy — and to meeting the baby she calls Franki — was shadowed by what-ifs. Pregnancy after a loss comes with a thick blanket over all of the emotions. Excitement is tinged because what if this one doesn't last either? The desire to scream from the rooftops I AM PREGNANT is whittled down to a faint stirring: I'm pregnant, and I'm scared to tell anyone.

Himmel chronicled as much in her Trying diaries. In her eighth installment, she explained she was pregnant, and terrified of her response to the positive test. "These last few months of putting every last ounce of faith in becoming pregnant again, I haven’t once thought about how I’d react when and if it actually happened," she wrote.

She phoned a friend, and then a new emotion washed in — guilt. "The first person I share my news with isn’t my husband. I feel guilty about that, but I don’t want to get his hopes up only to maybe get let down again. What if the test is inaccurate? What if the baby doesn’t have a heartbeat? What if the growth stops?" she wrote.

"A lot of times, my fears and anxiety got in my own way."

For those who haven't experienced a loss, these emotions feel out-of-control and over-the-top and other hyphenated descriptions. But trying to get pregnant can take time, and when you get a positive test and then lose that pregnancy, starting all over again feels like a dangerous game. What will be different? What's going to change? How do I know this is worth it?

That guilt followed Himmel about halfway through her pregnancy. She wrote about feeling guilty for complaining about the many aches and pains of pregnancy. I ask her if those around her pushed her to embrace every moment, if they were constantly reminding her to "soak it all in," like so many pastel Pinterest memes in flowy fonts say to do.

"I think my inner voice was telling me to embrace it more than my peers," she tells me. "A lot of times, my fears and anxiety got in my own way."

Himmel's miscarriage wasn't indicative of a problem — she was just part of an unfortunate statistic — and it didn't make her second pregnancy, conceived without assistance, any less likely to make it to term. Knowing this helped with her worries and fears. "My pregnancy after miscarriage was fairly easy and uneventful in a physical sense, which made it easier for me to embrace the changes gradually," she says. She also practiced meditation and received acupuncture to quell the emotional challenges. So what else was different about Himmel? How come, in a country where anywhere from 20-25 percent of women experience a mood disorder during or after pregnancy, she says she felt only bliss in those early days and weeks?

The clues may be in her writing. "Before pregnancy, I was never a pessimistic person," she wrote in her 10th Trying installment. She also talked about trying to find comfort in the statistics, which were "overwhelmingly" in her favor.

A positive outlook can be one of the most important predictors of resilience: in a study of 750 Vietnam War veterans who did not experience PTSD or depression, optimism was the key trait that set them apart from their peers, according to researcher Dr. Dennis Charney of Mount Sinai School of Medicine, as reported on by The Atlantic. The same article noted a 1993 paper in the Journal of Cognition & Emotion, which found depressed people who ruminated on their condition became more depressed. Taken together, the literature says that people process the same events differently — some are fortunate enough to be tilted toward resilience.

"I reminded myself that I was allowed to feel everything I was feeling — both good and bad — and tried to be fully in tune with my emotions and body."

Of course, avoiding stress and anxiety after pregnancy isn't always as simple as staying optimistic. And yet, Himmel seems to be a study of optimism personified — even when she tells me about giving birth to Franki and her 30-hour labor (30 hours!), she seems to laugh it off. "They call it 'labor' for a reason I guess," she tells me, and says how grateful she was that she had an epidural after being given Pitocin. "The delivery was pretty much pain-free," she says. "Because of this I was more relaxed and fully able to savor the moment and be present."

After Himmel's guilt subsided halfway through her second trimester, she was able to truly lean into all her feelings. "I reminded myself that I was allowed to feel everything I was feeling — both good and bad — and tried to be fully in tune with my emotions and body," Himmel says. And when her little girl was born, "there was more [of] a shift in mentality."

It's all a gift — the positive test, the easy pregnancy, the healthy baby — but those feelings of happiness don't always come easily. The Massachusetts General Hospital Center for Women's Mental Health found that one in 10 women who experience a miscarriage meet the "criteria for major depression."

I ask Himmel how her anxiety over getting pregnant — and then anxiety after the positive test — affected her once her daughter was born. She tells me that relying on positive thinking has helped, much as it did through her pregnancy.

"In the first few weeks after she was born, I did pay extra attention to her breathing during the night — which I don’t think I was alone in doing," she says. "When you are in charge of the wellbeing and safety of another life, I just wanted to make sure I was doing everything in my power to keep her healthy and safe." But she tells me that "close attention" has decreased a bit each week. "I have entrusted that my husband and I are doing a good job as parents and don’t need to obsess."

Now that she's out of the fourth trimester? Himmel tells me her greatest anxiety stems from going back to work. "I return to work next week from maternity leave, where she will be attending day care full-time," she says. "Being a control freak, it is troubling to leave the most important being in my world in the care of someone else. I am excited to get back to my schedule, adult interaction, and brain stimulation, but the thought of missing out on milestones or that she somehow becomes attached to someone more than me can be very overwhelming."

Of course it's overwhelming — she went through a lot to have Franki. But if there's one thing this journey has shown Himmel, it's that her best bet is to trust herself. She has, in a way, moved on from that first loss and created a new space: one for her and her daughter to be among all of those emotions, and still feel joy.