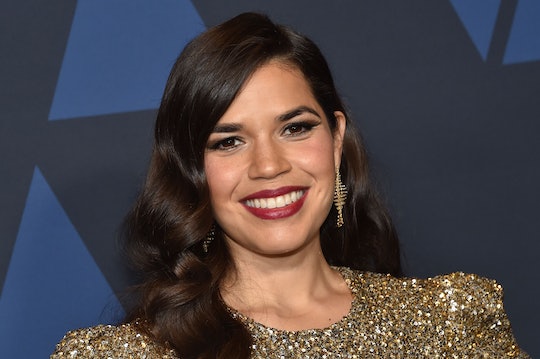 One of the celebrity trends I can really get behind is this whole secret pregnancy thing. It's become increasingly popular for celebrities to shock their fans with a social media pregnancy announcement when they're already several months along. I call it the Beyoncé effect, and it looks like America Ferrera is right on trend. Ferrera announced her second pregnancy on New Year's Eve with a winter wonderland bump pic, which is great because now we won't have as long to wait until the baby arrives.

The Superstore star and her husband, actor/director Ryan Piers Williams, are already parents to 1-year-old little boy Sebastian Piers Williams and it looks like they're going to make him a big brother in the near future. Ferrera took to Instagram on New Year's Eve to share a sweet outdoor family photo in the snow, People reported. Piers Williams crouching down alongside Sebastian, his back to the camera to protect his privacy, as both father and son place their hands on Ferrera's baby bump. She captioned the photo, "Welcoming Baby #2 in 2020! Happy New Year from our wild & growing bunch." While the Ugly Betty star didn't specify when the new baby is expected, her bump is already showing so it can't be too terribly far off.

Ferrera and Piers Williams welcomed son Sebastian in May 2018 and coincidentally enough they announced they were expecting him with a surprise pregnancy announcement on Dec. 31, 2017, as E! News reported. At the time the couple shared a photo of themselves wearing colorful 2018 glasses and holding up a little onesie with the caption: "We’re welcoming one more face to kiss in 2018!"

I guess the couple must have been happy with the way that first pregnancy announcement panned out since they decided to do it again the second time around. Certainly Ferrera's social media followers were happy to hear the news, with celebrity pals like Reese Witherspoon sharing their well wishes on her wall, writing "Congratulations!!!! This is the most exciting news." Actress Kerry Washington's response to the news was pure excitement as well, "WOOOOOOOOOO HOOOOOOOOOOOCongrats to you all."

It is a pretty exciting time for Ferrera, as she could potentially be the mom of two little ones under the age of two if she gives birth this spring. The good news is that the wait won't be too long. Because of her fondness for surprise pregnancy announcements, Ferrera's pregnancy will go by in a flash. For her fans at least.