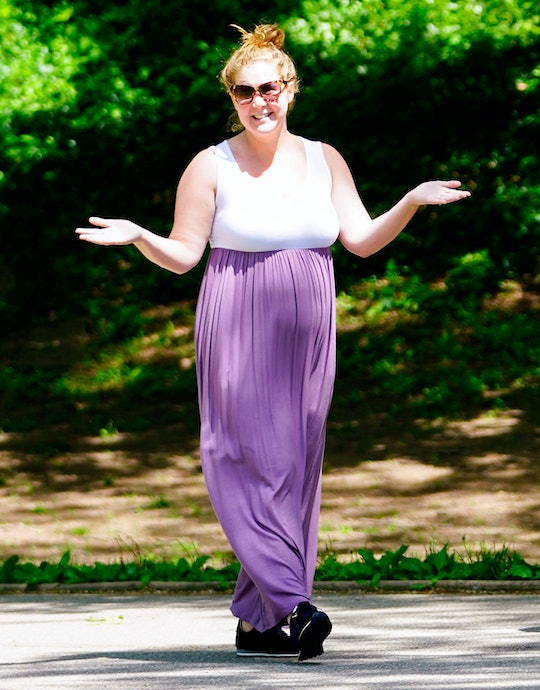 Any time a mom looks at her body and tries to come to grips with what giving birth did to her, she can simply head on over to Amy Schumer's Instagram for a chuckle. For instance, are your boobs feeling a little lower than you were hoping? Well, Schumer's joke about her post-baby boobs will make you feel seen. Because I guess this is her other job after being a comedian, actress, writer, and mom — she also shares topical little bon mots with her followers like a free life coach for the postpartum set. Hallelujah.

The I Feel Pretty star and her husband, chef Chris Fischer, are parents to 8-month-old baby boy Gene. Schumer's fans had to know she was going to keep things seriously real as a mom, particularly after her pregnancy posts where she got super honest about her hyperemisis gravidarum, a kind of extreme nausea that plagues some pregnant women and even landed Schumer in the hospital due to dehydration.

Now that Gene is 8 months old, though, Schumer is no longer dealing with all of that nausea but is, instead, taking stock of all of the changes motherhood has created in her body. Like her boobs, for instance, which she said should be nominated for a "sag award" following the 26th Annual Screen Actors Guild Awards held on Sunday night.

On Monday, the Trainwreck star shared a photo of herself in a sweatshirt pointing at her breasts with the caption, "I should be nominated for a sag award #notwheretheyoncewere." This is one of those very common issues that many women experience after childbirth, as WebMD notes, particularly if they also happened to breastfeed or pump, as Schumer did in the early months of motherhood.

Other moms shared notes of solidarity with Schumer on her post, commenting things like "Welcome to the club lady!!" and "Maybe after a couple more kids! Better luck next time!"

Schumer's body is really going through the ringer these days, it seems, because she's not just recuperating postpartum but also going through IVF treatments as she and Fischer are "figuring out what to do" to have a second child. On Jan. 9, she posted a photo of her bruised belly on Instagram and admitted at the time that she's feeling "run down and emotional" about the experience.

Fortunately for moms everywhere, though, Schumer has continued to share an honest and oftentimes humorous look at all things motherhood — even when things are "not where they once were."