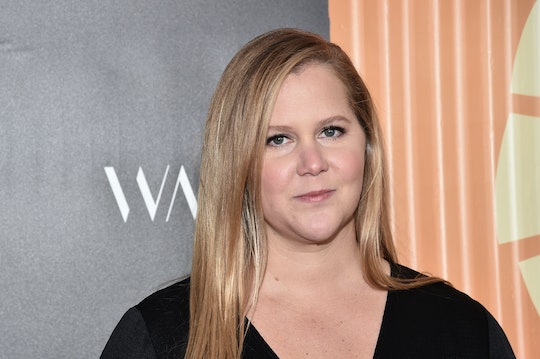 Amy Schumer might have vowed to share less photos of her six month old son, Gene Attell Fischer, on social media. But that doesn't mean that she is done sharing everything about him. She is still allowed to gush as much as she wants. Fans might be delighted to know that Amy Schumer says her son has reached some fun milestones, which sounds so exciting for her.

Schumer's son with her husband, Chris Fischer, is officially six months old, and she told E! News that she has been loving every single second of motherhood. "The hype is real," she said. "Believe the hype...I'm so lucky."

Schumer is feeling particularly grateful since her son has reached the six month mark and is reaching so many new milestones that would seem exciting to any parent. But since her son started eating solid foods, things have gotten a little complicated. "He's not totally digging them," she said. "We did a little sweet potato today. [He] likes the applesauce. That's kind of it."

The fact that Schumer shared this information is so appreciated, especially since she just recently announced that she is going to stop posting photos of Gene on her Instagram account. "I'm not gonna post him anymore," she wrote in the caption of an adorable photo of her son, dressed as an old man.

Although Schumer didn't give any reasoning behind this decision, she didn't have to. Let's be real, the past six months have been filled with such cute photos of Gene and other updates from Schumer, that it's understandable why she would want to suddenly give him some privacy. But even without these updates, it's obvious that Schumer is going to keep falling in love with her son and being a parent.

In October, Schumer wrote in an Instagram post that she loves Gene "so much it hurts." And that definitely comes across in every single post and every thing that Schumer has said about her son.

Even though the updates about Gene might be less frequent, things are clearly still getting exciting in Schumer's household. Once Gene conquers solid foods, he will pretty much have the tools to take on the world.