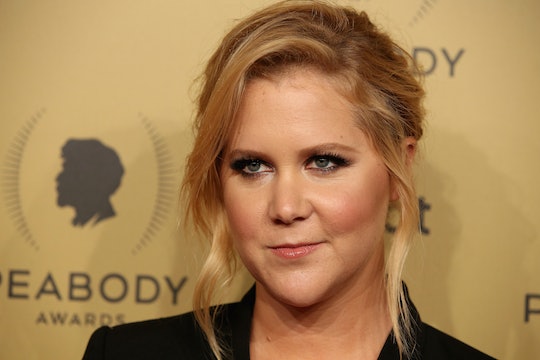 Getting back into the swing of things after giving birth is much easier said than done, especially after a particularly taxing and difficult pregnancy or birth experience. But, fortunately, for one comedian and actress, things are starting to feel normal again. In fact, nearly three months postpartum, Amy Schumer recently shared that she's finally feeling "strong again" after her tough pregnancy with her son, Gene, whom she welcomed in May.

Throughout her pregnancy, Schumer had been open with her fans and followers about her struggles with hyperemesis gravidarum (HG), aka very extreme and often debilitating morning sickness. Back in December, for instance, she shared a photo of herself on Instagram hooked up to an IV. Fortunately, though, it seems like she's finally feeling better and has been enjoying some quality time with her hubby and baby boy.

On Sunday, in fact, Schumer posted photos from a recent trip to the beach on Instagram. The first photo showed her and husband, chef Chris Fischer, walking back from the ocean. And the other photo showed Fischer pushing Schumer in a beach chair with wheels and she held their dog and the whole photo just screams #RelationshipGoals.

"We're good," Schumer captioned the fun and silly images, which her followers couldn't get enough of, really. For example, professor and economist Emily Oster, who's appeared on Schumer's podcast, commented, "You in the beach wheelchair is everything." Many followers also commented on Schumer's chic suit, with one writing, "Your bathing suit [looks] amazing!"

It seems one positive comment in particular caught Schumer's attention, which read: "So beautiful a normal [woman's] body you look great!!"

Schumer responded to her follower with a little update about postpartum life. "I am loving my warm soft post baby body. Grateful to be feeling so strong again!" Schumer, who gave birth to her son in early May, replied.

The I Feel Pretty star has been refreshingly candid about her tough pregnancy and postpartum life. In June, for instance, she shared a photo of herself wearing nothing but a bra and mesh hospital underwear while hiking with Gene.

"5 weeks. Hospital underwear for life!" Schumer captioned the photo, which also saw an influx of praise, including a lovely and appreciative comment from model, blogger, and makeup artist Tess Holliday. "Thanks for being so raw and vulnerable about the realities of post partum life," she commented on the photo. "There is so much pressure on new moms to 'bounce back' & it's not real life. You're doing amazing & you're amazing & those hospital undies are COMFYYYYY."

Shortly after Gene was born, Schumer shared a photo from the hospital that fully captured the post-birth experience. As noted by Vogue, the picture showed the new mom sitting on a hospital toilet sporting a blue gown and slipper socks with her hair a mess while a friend held Gene. She appeared to still be hooked up to an IV at the time and was scowling at the camera.

Schumer has always been incredibly candid, but motherhood has definitely changed her. Beyond connecting with fans about the oft harsh realities of sex and dating, she's also getting really real about motherhood — even the ugly and painful stuff no one wants to talk about. I wish I'd had someone like her around after I had my son. It would have been a great support for some of those early anxieties.

More Like This
Does Pumped Breast Milk Have Antibodies? Experts Weigh In
Why Does My Baby Cough While Breastfeeding? Experts Explain
In Search Of New York City's Most Luxurious Birth Experience
Olivia Newton-John's Daughter Chloe Shared A Lovely Tribute To Her Mom After Her Death