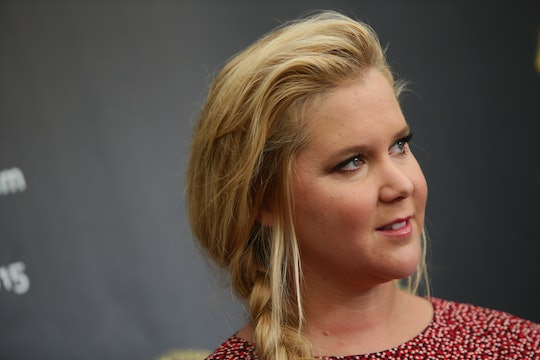 Childbirth and pregnancy are often described as two of the most life-altering and beautiful experiences of a woman's life, but those milestones also come with less glamorous truths like mesh panties, morning sickness, bloating, and vomiting, to name a few. Rarely do we get to see the raw experiences behind cutely swaddled newborn babies and glowing new mothers on social media. But Amy Schumer’s post-birth hospital photo is getting a lot of praise (and laughs) from fellow moms right now for its honest and comical truth, providing a real look at this stage of postpartum life.

The relevance and realness of the photo was definitely not lost on her fans, but especially so with other mothers.

“Lmao yassss show the real deal,” Jersey Shore's Nicole "Snooki" Polizzi, who is a mother of two and is currently expecting one more, commented. Jenna Fischer, aka Pam from The Office, shared, “Happy Mother’s Day! This is it right here!!” And actress Selma Blair wrote, "True."

"Oh my gosh I love her she’s keeping it real!” one of Schumer's followers said. Others tagged their friends, saying, "How accurate is this??? Just missing my compression stockings."

Schumer, who welcomed baby Gene Attell Fisher to the world on May 5 at 10:55 p.m with her husband Chris Fischer, had been very open with her fans throughout her pregnancy about the very real challenges that pregnant and new mothers face. For instance, back in March the comedian, who struggled with an extreme form of morning sickness called hyperemesis gravidarum throughout her pregnancy, shared on Late Night With Seth Meyers, “It's been pretty tough, I didn't know that pregnancies could be such a bummer. I threw up a bunch of times on my way here. Worth it, love you guys so much... I'm lucky, I have good health care and I get an IV and survive.”

And since giving birth, the comedian has given her 8.7 million fans on Instagram an inside look into motherhood. Shortly after giving birth, she shared a sweet photo of herself cradling baby Gene with the hilarious caption, “New kid, who dis?"

Never failing her fans with her incredible sense of humor, Schumer’s journey into labor was no less funny. In the weeks and months leading up to baby Gene's birth, she shared several photos of herself preparing for delivery, captioning one post displaying her pregnant belly: “Oh yeah does it feel to everyone like I’ve been pregnant for a long time? It must be getting annoying to you all that I’m still pregnant. Well imagine how I feel mother f*ckers!!!!!!”

If there’s one thing that we know for sure, it’s that Amy Schumer’s honest and comical take on the realities of pregnancy, postpartum life, and motherhood thus far has really resonated with moms and women everywhere.