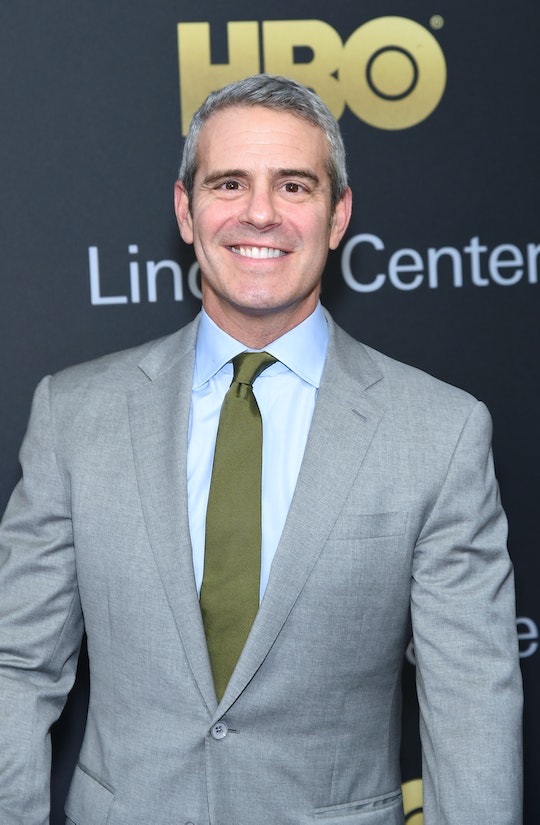 Welcoming a new baby into the family is a big deal for everyone in the household, especially siblings. And most especially if those siblings happen to be dogs. It's sort of impossible for a dog to understand why there's suddenly this small, often noisy person in their house and why everyone seems to be so distracted by it. You can't blame a dog for getting jealous... but let's not go assuming that every dog is jealous of every baby. Definitely don't say this to the host of Watch What Happens Live. Because Andy Cohen's dog ate his baby's toy and he's really not here for people making a big production out of it.

Cohen welcomed his son Benjamin Allen almost two weeks ago via surrogate, and he is pretty busy these days just trying to figure out this beautiful, uncharted territory of parenthood. A territory he wasn't sure he would ever have the opportunity to experience as a gay man, as he told People after announcing he was about to become a father: “I always knew that I wanted a family. But as a gay man, I never thought it was in the cards for me.”

And now that he is a father, he gets to navigate a whole new set of experiences. Like making sure his dog Wacha and his son Benjamin can live in harmony together.

When Cohen first brought Benjamin home, he took his time introducing his beloved rescue dog to his beloved son. As he told People in a recent interview:

Wacha has not met Benjamin yet. I want to get Benjamin acclimated to the space and get us acclimated to everything. And then that dog is going to bound in here in a few days. He’ll be back.

It seems as though Wacha got into a little mischief upon his return, however. He ripped apart one of Benjamin's toys.

Cohen shared a cute video to his Instagram Story showing a torn apart purple stuffed toy and a very guilty looking (and hilariously exhausted) dog. He said in the video, as per Entertainment Tonight:

Did you just eat my son’s stuffed Torah that the Rabbi gave him Wacha? And now you’re exhausted? That was my son’s Torah. Did you want to explain to my son what you did? And what do I tell the Rabbi? Wacha? Wacha!

Cute, right? And not a big deal since dogs are into chewing up stuffed animals on the regular.

Except apparently not everyone agrees.

Cohen addressed a stream of criticisms he received in his private messages, people concerned that the dog was jealous of baby Benjamin and he might therefore have a "big problem on his hands" as he shared in his Instagram Story, as Entertainment Tonight reported:

Wacha didn’t know that the Torah toy, we’re talking about a Torah toy, belonged to the baby. He just had his eye on a purple f— toy, and he wanted to rip it apart. It’s not that deep. Stand down. Everything’s fine in the West Village.

For good measure the new dad also noted that people were "judgy as f***" and wanted them to remember he's only been a dad for 12 days.

It should be noted that Pet MD shared a list of nine signs your pet could be jealous of your baby, and ripping up a Torah toy didn't make the cut.

I'm sure Cohen, Benjamin, and Wacha will manage to figure out their new normal.

Although Cohen might want to be aware that his new normal will probably include dad shamers. Such is life.