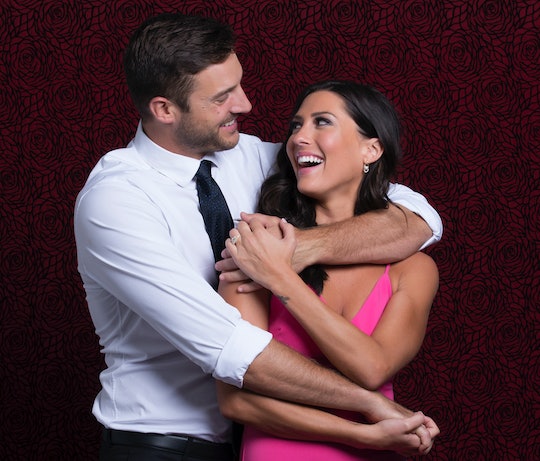 No matter how sad you were at the end of Arie’s season of The Bachelor, it was hard not to have a renewed sense of hope when Becca found love on her season of The Bachelorette. There were a handful of legitimate contenders, but Garrett always seemed like the perfect match for her and the season ended with a proposal. So are Becca and Garrett still engaged after The Bachelorette? After I got done wiping my tears over Blake being dumped on the season finale, I couldn’t help but cheer for Becca and the love she found with Garrett after having her own heart broken on The Bachelor months before.

Even when I rooted for some of the other guys on and off, it was clear that Garrett was one of Becca’s top choices from the start. They continued to be total couples goals when they appeared on the After the Final Rose special and joked about doing normal things together like shopping at Costco and just walking down the street without cameras or other potential love interests close by. It’s the little things, right? While they told Us Weekly in December that there are no immediate wedding plans, they are still engaged and have been setting up their life together outside of the show.

In August, Becca told People that although she had some reservations about Garrett at first, since he’d been married once before, he was like a missing puzzle piece in her life. At the time, they had no concrete plans for their actual wedding, but had decided to spend time traveling together before moving in together in Los Angeles. More recently, they told Us Weekly that they’re going to be house hunting in San Diego, but things definitely seem to be progressing for the couple.

Although they haven’t announced any actual wedding plans just yet., they might be closer than ever (literally) to where they want to get married. At an event in Atlantic City in October, Becca said that they talked about getting married at a vineyard in California. Since they’re about to put down roots in San Diego, they might be looking for a venue sooner rather than later. She also said that they wouldn't hesitate to include some of their new BFFs from The Bachelor and The Bachelorette as wedding guests.

As for their actual wedding date, that’s still up in the air and likely in the distant future. In September, Becca told Us Weekly that they were still getting their bearings as an engaged couple. "Just being normal has been wonderful," she told the magazine. "We were just so ready for the show to be done airing where we could finally be out in public. We really are still getting to know each other."

Although they don't have plans to get married anytime soon, they are still very much together. They appeared on the live Bachelor premiere Monday night and seemed more in love than ever. Becca and Garrett are also continued proof that The Bachelor process really does work if you’re willing to take your time afterward. The show itself allows just a few weeks to really get to know the other person one on one, so it’s no wonder that Garrett and Becca have chosen to take things slower outside of the show.

On the flipside, Arie and Lauren, who was essentially his runner-up choice when he originally proposed to Becca, are now engaged to be married and expecting a baby. You’d think seeing your ex who screwed you over enter into domesticated bliss would make Becca want to rush down the aisle, but she really is just living her best life with Garrett.

At this point, they’re as normal of a couple as you can be after meeting and getting engaged on national TV. I won’t stop holding out hope for an amazing televised wedding, however.