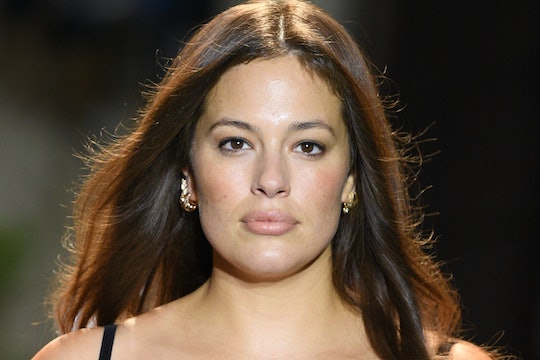 Like most moms, but perhaps especially celeb moms, Ashley Graham has dealt with plenty of mom-shamers since she welcomed her son Isaac with husband Justin Ervin earlier this year. And during Tuesday's edition of Red Table Talk with Jada Pinkett Smith, her daughter Willow Smith, and Adrienne Banfield-Jones, the Sports Illustrated model made a pretty accurate observation: "Mommy-shamers are just mean girls who grew up to be mothers."

On Red Table Talk, Graham, who gave birth to her first child in January, shared the story behind a photo from the first time she took her baby boy out in public back in February. In the photo, she is sitting at a cafe enjoying a hot beverage while she breastfed her son.

"He was just under a month old and I wanted to go to my favorite brunch spot," she told Pinkett Smith. When Graham had to breastfeed her son, she asked her husband to take a photo since it was her first time doing it in public. "Sure enough I got mom-shamed."

Graham admitted that she "knew that it was coming and I was ready to combat it," but it "never feels good to have someone tell you that you’re not doing a good enough job, that you’re doing something wrong."

The sad fact is that 60% of mothers have experienced mom-shaming online, as a 2017 survey by C.S. Mott Children's Hospital at the University of Michigan found. And as Graham shared in the same interview, she feels people who attack others' parenting choices are "just mean girls who grew up to be mothers."

But mom-shamers are not just online, of course. "I've definitely been shamed by close family members," Graham shared, adding that it most recently happened because her baby boy was not sleep-trained at 3 months old.

Instead of the criticism, Graham would "rather have a conversation," especially when it comes to the incredibly delicate subject of motherhood. "I don't want somebody coming at me or telling me what I need to do," she said on Red Table Talk.

As Graham wrote on Instagram, "Every type of shaming is hurtful and wrong, but mom shaming gets to me in a different way. It makes us question the one thing we are most worried about — setting our children up to be happy and healthy."