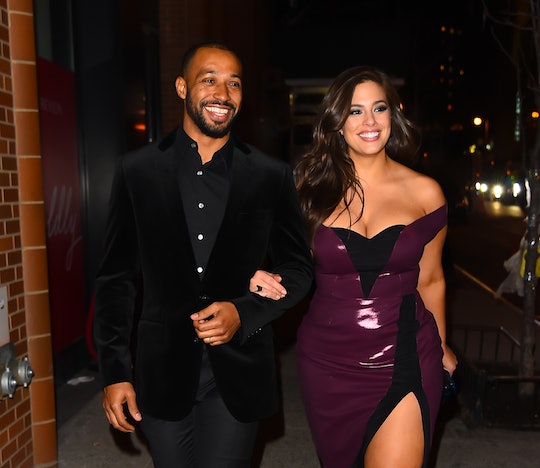 For most of us, quarantine has been all about baking bread, staring off into space a few too many times in the day, and maybe even starting a TikTok account. For Ashley Graham? She recently posed nude while breastfeeding her son in a gorgeous photo shoot by her husband Justin Ervin on her aunt's farm.

For the Friends and Family issue of Elle, Graham and Ervin, a director and cinematographer, recently pulled together a truly epic photo shoot at her aunt's farm in Henderson, Nebraska, featuring some stunning fall looks and the couple's 6-month-old son Isaac. In a lengthy Q&A interview for the magazine conducted by actress Kristen Bell, Graham talked about what motherhood has looked like for her during quarantine and admitted that she has appreciated the fact that she's "been able to watch Isaac grow up before my eyes."

"Experiencing every single moment with him has been a dream come true," she told Bell for the newest issue of Elle. So much so, in fact, that she even joked she's worried about any subsequent kids she might have. "I feel really bad for the next kid, because I don’t know if they’re going to get this much attention," Graham, who grew up in Lincoln, Nebraska, said in the interview.

Certainly one of the photos taken by Ervin for the magazine featuring Graham in the nude breastfeeding their little boy with a smile on her face gives the impression that Isaac is her entire world in that moment.

Graham has been able to quarantine with her family for the past few months, Ervin and baby Isaac as well as her mom. Although she told Bell in her interview for Elle she has "learned to be creative" parenting a newborn during the quarantine, as well as learning "how to live under one roof with my mom, her boyfriend, my husband, and my son."

Fortunately for Graham, her mom sounds like an incredible role model to have around for both Isaac and herself. In an Instagram Live video in April, Graham talked about how her mom Linda had always led by example, especially when it came to promoting confidence instead of criticizing herself. "Instead she embraced her 'flaws' and never even identified them as flaws," Graham said in the April video. "She talked about her strong legs, her strong arms, and made me appreciate my strong legs and my strong arms, even to this day."

Her mom has been a help in more ways than confidence building; she also offered a refuge for the entire family. Back in April, Graham spoke to Oprah magazine about her decision to leave New York and head to Nebraska with her mom, husband, and baby during the pandemic. "We had a lamb roast in the car with us, so we made lamb roast sandwiches in the car...we didn't even stop to eat! We didn't know what was gonna happen in New York, we just wanted to be in a place where we had space and outside accessibility...and being in New York in a two-bedroom apartment, we were like, 'We don't know how we're gonna do this!' So thank God for my mom, that she had this house here," Graham told Oprah.

Quarantine with a newborn and her family looks like it suits Ashley Graham down to the ground. And the fact that she's sharing that glow with the rest of the world is a gift indeed.