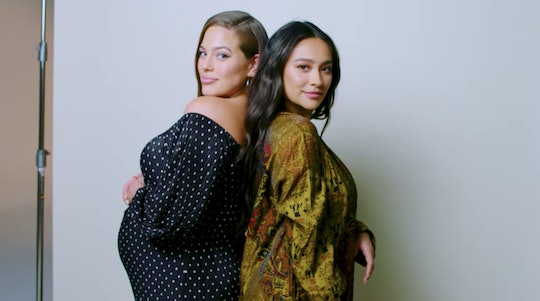 Ashley Graham has just a few weeks to go until she welcomes her first child. And while she waits for her bundle of joy to arrive, she's gotten some expert advice on this whole mom thing from none other than Shay Mitchell. During an episode of her podcast, Pretty Big Deal with Ashley Graham, she and Mitchell discussed mom-shaming in an eyeopening conversation.

Mitchell welcomed her first child with boyfriend, Matte Babel, on Oct. 8, 2019. Although their daughter, Atlas, is just a few months old, Mitchell is rich with advice when it comes to parenting in the public eye. As such, Graham, who is set to give birth to her first child, at the end of January, invited Mitchell on her podcast to discuss all of the nitty gritty details surrounding pregnancy and birth.

The conversation ultimately made its way to the topic of mom-shaming, something both women are anticipating and have already experienced in one way or another. Mitchell explained to Graham that she was shamed for attending Drake's birthday party weeks after giving birth. "When it all went down, and people were leaving comments like, 'you are the world's worst mother already, that child needs to be taken to child services' I was like 'wow!'" Mitchell said on the podcast.

Mitchell was taken aback by the criticism. "It had actually been a couple of weeks after [Atlas was born], and it felt like the right time," she explained. "We went out for an hour and a half and I was back, and not even do I feel like I have to explain myself, but it bothered me for the other women and new mothers out there who maybe don't have a great support system around them to be like, ‘Don’t listen to it' ... And that’s what pissed me off."

Graham shared that she's anticipating the realities of mom-shaming, too. "While I could not be more excited for motherhood, I can't help but be nervous about mom shaming," she wrote on Instagram, alongside a video of their conversation. "As you transition into motherhood it's up to YOU to know when the time is right to return to work or have a night out."

Instead, Mitchell said that people should praise and uplift moms. "I was like, 'How dare you already make a new mom who is already going through a lot of doubt and guilt obviously when she leaves for the first time?" Mitchell told Graham of the shaming she faced. "That should be something that is celebrated. Living your life as you did before and as you continue to do with your child."

Though she's been mom-shamed, Mitchell clearly hasn't let it get to her too much. In the months since giving birth, she's traveled by plane with her daughter and returned to work with her by her side, documenting all on Instagram for her followers to aww over and, well, scrutinize.

During the podcast, Graham shared with Mitchell that she's already worried about the potential shaming she may face once her son arrives. "It reminded me, 'what are people going to say when I have my kid?'," she told Mitchell after sharing that she was shocked when she heard Mitchell didn't want to take maternity leave. "You have proven that it doesn't matter what you put out, go back to work, do what you want," Graham said.

Ashley Graham's first child will be here before we know it and while mom-shaming seems inevitable in this day and age, thankfully she has a fellow mom friend to turn to whenever the trolls decide to strike.