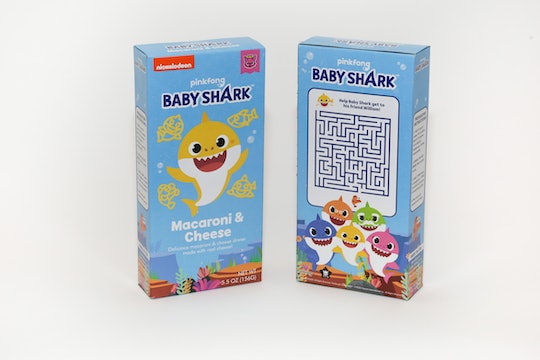 After being the designated lunch lady on duty for the past four months solid, you’re probably running out of ideas when it comes to making meals for your kids. Good news: Just when you thought you'd heard the last of a certain cartoon fish, Baby Shark Macaroni & Cheese is coming exclusively to Walmart, and it’s a definite do do do do do do.

It might have been a minute since you heard the insanely popular "Baby Shark" song from Pinkfong. Since it first came on the scene in 2016, the song has almost 6 billion (with a "B") views, and the feeding frenzy for the sweet little shark hasn’t stopped. You can find everything from plush toys to swimsuits to face masks... and now, Baby Shark Mac and Cheese, which will be taking a big bite out of the culinary competition starting July 27, according to a press release.

Move over, wagon wheels and elbows. The macaroni comes in four fun shapes: Baby Shark himself, two other sharks, and a funny little fish. If you cook the pasta to al dente perfection, you’ll be able to see the shapes even if they are slathered in yummy cheese. (Expect to see some "hunting" action going on in your kid's bowl.) They're actually pretty adorable, too:

Prep the pasta just like you would any other boxed mac ‘n cheese: boil 6 cups of water, and let the macaroni cook for 8-10 minutes. Drain the pasta (but don’t rinse it), and then add 2 tbsp of butter, 3 tbsp of 2% milk, and the cheesy seasoning packet. Mix it until it’s all creamy and dreamy. And if your kids are impatient while they wait for the macaroni to cook, they can grab a pen and see if they can get baby Shark back to his friend William in the puzzle on the back of the box.

Now, if you’ve noticed that your food bill has gone way up during the summer with the kids home all day, you’re not alone. But at 50 cents a box, at least this mac and cheese won’t break the bank. There are approximately two servings per container, which means that depending on the number of kids you have, you could probably feed them a filling lunch or dinner for just a couple of bucks. (Now that’s something you can really sink your teeth into.)

More Like This
Where To Buy School Uniforms, From Jumpers To Dress Socks
18 Cute Notebooks That Make Every Subject Exciting
These 21 Educational Board Games Are Perfect For Homeschoolers
These Back-To-School Supplies On Amazon Are Total Wins