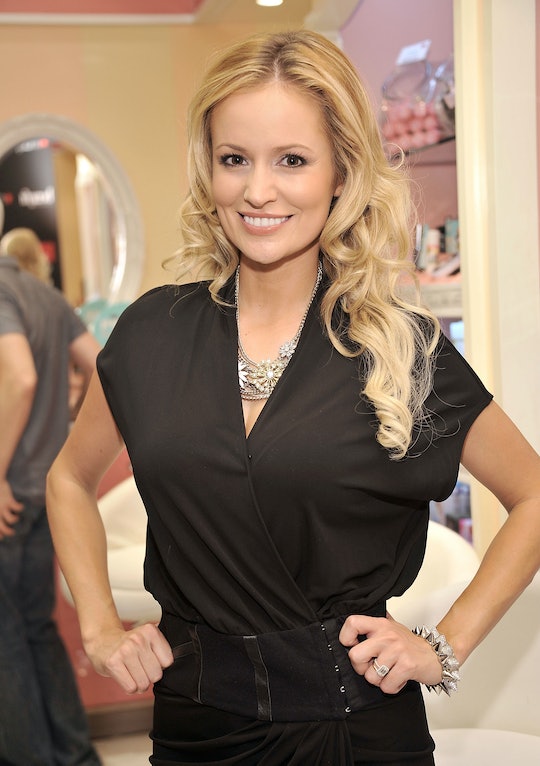 Congratulations are in order for another contestant of the Bachelor franchise. On Sunday, Bachelorette alum Emily Maynard gave birth to her fourth child, according to E! News. The new bundle of joy is also Maynard's third child with husband Tyler Johnson, who revealed the baby news in a heartwarming Instagram Story.

Johnson captured the labor and delivery in a series of photos he posted to his Instagram account throughout the day, E! News reported. In one shot, Maynard is seen laying back in a hospital bed with her eyes closed. Johnson captioned the image,

Can't wait to meet you baby!!

Later, the excited dad shared a video of Maynard laying in a hospital bed, holding their newborn with the message, "#4 here!" Johnson also posted a photo of their baby little one meeting "big sis" Ricki, Maynard's 12-year-old daughter with late fiancé Ricky Hendrick, a Nascar driver who died in a plane crash 13 years ago, according to Us Weekly. Maynard and Johnson have two other children together: sons Jennings Tyler, 2, and Gibson Kyle, 11 months.

But Johnson wasn't the only proud parent sharing the baby news on social media. According to People, Maynard also posted images and photos from the big day to her personal Instagram account.

In her first post, Maynard shared an image of a champagne bottle and dessert, with the message, "hospital camp out." In another, the former Bachelorette contestant posted a photo gallery of her family with her new baby boy, including a sweet head-on image of her sleeping newborn.

Maynard and Johnson have yet to name their new baby. According to Maynard's Instagram post, the couple, who tied the knot in 2014, can't decide on something just yet. The 31-year-old mom of four continued in her caption,

welcome New Baby Johnson to the world. If anyone has any good boy names send them my way! We need help!

It's no surprise that #BachelorNation learned about the birth of Maynard's fourth child through Instagram, though. The young couple also used the social networking platform to reveal their pregnancy news back in late August. Johnson first shared a short video of a very pregnant Maynard and son Jennings Tyler taking a stroll while enjoying some ice cream.

Maynard later posted the same video to her Instagram account on Aug. 29, with a hilarious — and honest — caption that expressed the trials and joys of expecting another child.

Way too many tacos at lunch. ---Seriously though, as scared as I am to have 3 under 3, I'm so grateful God picked me to be the mommy to my kids and we can't wait for number 4 to get here!

She also revealed in the same post that she had to have surgery during her third trimester. The Bachelor and Bachelorette alum added,

This pregnancy has been filled with lots of hot wings, ranch dressing, an emergency appendix surgery at 6 months, and swollen ankles all day every day but I wouldn't change it for the world. My little tribe can't wait to meet their new brother or sister (it's a surprise!) in the next couple of weeks!

Obviously, the emergency surgery went well for Maynard and her now-newborn baby. And now the Maynard-Johnson clan can enjoy the new addition to their family. But will baby no. 4 be the last child for the couple? Maybe not. Maynard told People in September that she wanted to have two more kids. She said,

I have three kids now and I feel like once you get past two and you keep adding, it’s just like ‘Whatever.'

Whether Maynard has four or 18 kids, there's no doubt that she loves being a mother. So congrats again to the couple!