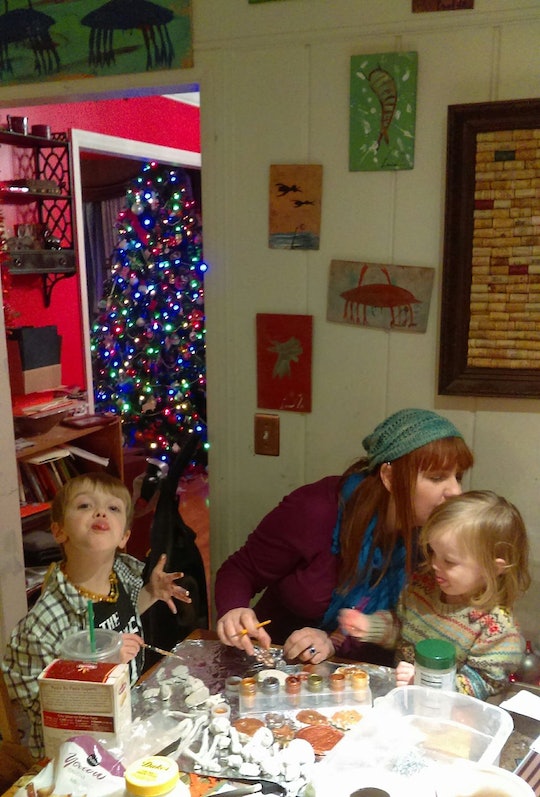 DeVos' Confirmation Makes Me So Glad I Homeschool

I know that homeschooling is a luxury not reserved for all parents and their children. It's a privilege that my family can afford to live on an income and a half, and that I have the patience, the energy, and the flex time to teach my kids the way my partner and I envisioned. We have access to a stellar library and great internet resources. I know not everyone has these things, and we know we’re lucky, and because we're fortunate enough to have these things, we chose to homeschool for a few reasons. Those reasons blew up when we found out Betsy DeVos had been nominated for Secretary of Education, and now that Betsy DeVos' confirmation is complete, I'm more thankful than ever we're homeschooling our three young sons.

First of all, DeVos is a proponent in favor of school choice. That means students get vouchers to attend private or charter schools. Conservatives say that with vouchers, schools are "pressured" to improve if they want to retain students. In reality, however, school vouchers suck needed money out of failing public schools. Vouchers funnel money into religious schools, opening up the possibility of giving federal money to places that teach, say, creationism. They also funnel dollars into lightly regulated charter schools, which may be spectacular - and might also be a disaster.

Most importantly, those private and charter school won’t have to offer the same accommodations to disabled students that public schools do. We homeschool, in part, because my oldest son has ADHD. He needs help focusing. He has trouble finishing tasks that don’t interest him (right now, that’s writing). He also benefits from sitting, sprawling, and laying in ways the traditional classroom doesn’t tolerate. During reading lessons, for example, he prefers to cuddle super close to me, and the physical pressure of my body against his helps him to focus.

He needs to stop and jump around regularly. It’s easier for us to deal with these needs at home. But if he were a public schooler - and he would be, because we can’t afford the private schools around here - they would be required to accommodate him. He’d likely get an Individualized Education Plan (IEP), which would detail his needs and ways for the school to meet them.

We’d have to stay in a public school that got worse and worse as money was siphoned to all those private and charter schools. His education would suffer. As would his future.

In South Carolina, where we live, public schools rank 43 in the nation, according to Education Week. I believe that with vouchers in hand, students will flee to whatever private schools that can take them. Those private schools wouldn’t have to adhere to my son’s theoretical IEP. They wouldn’t have to make any accommodations whatsoever for my son’s disability. Therefore, we’d have to stay in a public school that got worse and worse as money was siphoned to all those private and charter schools. His education would suffer. As would his future.

Right now, my son learns in a class of one. As a public-school student under DeVos, he wouldn’t reap the benefits of a small class. In fact, he would very likely get lost in the crowd.

All that money going away would mean firing teachers. Class sizes would increase — which was another reason we decided to homeschool in the first place. The schools around where we live average 30 kids in a class. That number would only rise as DeVos’ policies are implemented. Research from the Center of Public Education has shown that in K-3, academic performance can be boosted by classes of no more than 18 students. My son is in first grade. These gains persisted in ninth grade, with students who were in a small class for at least one year showing higher performance on standardized math tests. Right now, my son learns in a class of one. As a public-school student under DeVos, he wouldn’t reap the benefits of a small class. In fact, he would very likely get lost in the crowd.

And a charter school likely wouldn’t be an option for us. There’s not just the disability accommodation issue; charter schools generally underperform public schools. DeVos has long been experimenting with schools in Michigan, and that includes the promotion of charter schools. Following a year-long investigation by the Detroit Free Press in Michigan, researchers found 38 percent of charter schools receiving state academic rankings during the 2012-13 school year fell below the 25 percentile, which means that at least 75 percent of all other schools in the state performed better. It's worth noting only 23 percent of public schools fell below the 25 percentile. I’m not sending my son to a possibly underperforming school that has little state or federal oversight. We homeschool because I believe I can give my kids a better education than a traditional school. And with DeVos at the helm of the education system, I firmly believe my kid's chances of succeeding become even slimmer.

Then there’s the gun issue. DeVos says it should be up to the state and county to decide if guns should be allowed in schools; and my husband and I live in one of the most Republican counties in the nation. I believe that advocates would definitely push for armed guards and armed teachers in our area, and that's just not a chance I am willing to take for my children. According to MotherJones.com, being armed increases your chances of getting into an altercation. Armed civilians have never stopped a mass shooting. And owning a gun makes you more likely to be shot, either accidentally or by someone else. I don’t want my kids around armed people. We are a pro-gun legislation household, and part of that reason is because when gun ownership goes up, says MotherJones.com, so does gun violence. I don’t want my kids caught in the crossfire. I’m happier to keep them home, where we prefer a several large, intimidating dogs for protection. At least I know that by homeschooling, my kids are less likely to get shot.

We were already committed to homeschooling before DeVos' confirmation was complete. We’re lucky to be able to do it, and we don’t forget that. But now that Betsy DeVos is in charge of the Department of Education, I’m even happier we can make the choice to keep our kids at home. I can accommodate my son’s ADHD. I don’t have to worry about class size or quality of education. And I don’t have to worry about him getting shot. DeVos was a poor pick for Secretary of Education. We’re lucky enough to homeschool. Most of America can’t, and I worry about the quality of education they’ll receive under her. Because my kids aren’t special snowflakes. Every child deserves the chance to succeed, no matter what their accommodations are. And I fear, under DeVos, they won’t get it.