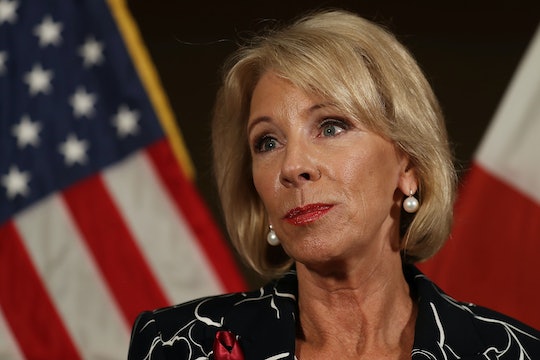 On Valentine's Day, a gunman opened fire at Marjory Stoneman Douglas High School in Parkland, Florida, killing 17 people and injuries dozens of others, according to news reports. In response to the deadly mass shooting, teen survivors have organized to demand action from lawmakers on gun violence prevention, including a ban on assault-style weapons. On Wednesday, U.S. Department of Education Secretary Betsy DeVos visited the Stoneman Douglas students in the wake of the massacre. But her visit did not go smoothly, not by a long shot.

Teenagers at the Parkland high school took to social media to express their frustrations and anger with the education secretary, who they believe failed to engage students, teachers, and staff on a meaningful level, according to BuzzFeed. DeVos, the survivors said, dodged their questions, avoided speaking to most people at the school, and wouldn't discuss their concerns. Many of the students even accused her of visiting Stoneman Douglas as a publicity stunt, BuzzFeed reported.

One student wrote to DeVos on Twitter: "Do something unexpected: answer our questions. You came to our school just for publicity and avoided our questions for the 90 minutes you were actually here. How about you actually do your job?"

Another Stoneman Douglas student tweeted on Wednesday, following the education secretary's contentious trip: "Betsy Devos came to my school, talked to three people, and pet a dog. This is incase [sic] the press tries to say something else later."

Ask the Department of Education, and the agency will tell you an entirely different story. The purpose of DeVos' visit, the education department said, was to "connect with students and teachers" following the bloody mass shooting that propelled survivors into activist roles, according to Vice News. Instead, DeVos toured the school with school officials and six students, laid a wreath in front of the building where the shooter entered, "interrupted" a counseling session, and disappeared into the ether when students had questions, Vice News reported.

Media was shut out from the visit, but 17-year-old Isabelle Robinson, one of the students on the tour, told Vice News that DeVos said she would sit-down with survivors "later down the road" when asked to answer some of their questions. DeVos also said she might not be in Washington, D.C. on March 24, the day the March for Our Lives protest will take place in the Capitol, when asked if she would attend, according to Vice News.

Robinson's response? “There are marches all over the country and in other countries, so it shouldn’t be a problem."

DeVos, though, did take the time to defend the idea of arming teachers in schools during a press conference later in the day, CNN reported. (It should be noted that the student group behind March For Our Lives and other survivors have spoken out against President Donald Trump's proposal to give educators guns.) She said during the news event Wednesday afternoon, according to CNN,

I think to say 'arming teachers' is over-simplification and a mischaracterization, really. I think that the concept is to, for those schools and those communities that opt to do this ... to have people who are expert in being able to defend and having lots and lots of training to do so.

But Stoneman Douglas Cameron Kasky, who founded #NeverAgain, responded on Twitter, in part: "How many people need to be packing heat until we realize assault rifles are made to kill and not to protect?"

DeVos didn't avoid questions only from students, though. The education secretary also reportedly dodged inquires by journalists who pressed her on what gun legislation she'd support, according to BuzzFeed. One reporter was overheard saying, "Five questions? That's it? Are you kidding me?"

It's not surprising that DeVos would fail to speak with students, or hold herself accountable by answering reporters. After all, this is the same education secretary who upended campus sexual assault policy in order to favor students accused of sexual assault, rather than the survivors who lived through the trauma. She is also the same secretary who has proposed drastic changes to the public school system that critics argue would hurt every student out there. Not taking the time to engage survivors of the Parkland mass shooting seems to be right inline with that behavior.

One thing DeVos or the White House probably didn't count on: the power of the student voice. Spin it how you will, but there's no way to cover up what is a seemingly disastrous visit from an out-of-touch administration.