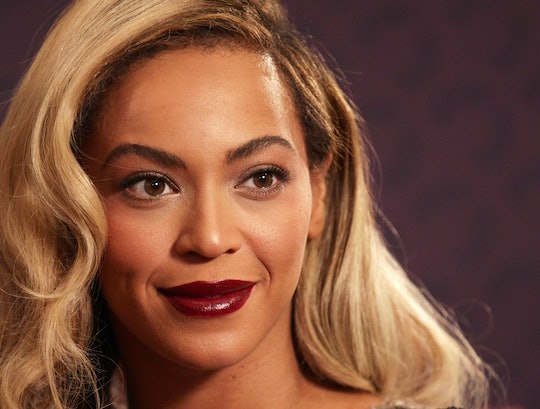 Here's What Beyoncé Has To Say About Those Constant Pregnancy Rumors

After years and years of people analyzing her body and making baseless assumptions about whether there's a bun in Queen Bey's oven, Beyoncé has addressed those constant pregnancy rumors with the most perfect response: "Get off my ovaries!"

Queen Bey's response came in a part of a candid "Ask Me Anything," wherein she responded to a variety of questions from fans across her social media platforms and email submitted to ELLE. The topics covered included her fashion line IVY PARK, representation and female empowerment, and life as a working mom. When one curious member of the Beyhive asked, "What question do you hate to answer?" And Beyoncé answered: "Are you pregnant? Get off my ovaries!"

The mom of three's response is understandable considering how often her fans question if she's expecting. Most recently, a photo posted of her at the Tyler Perry Studio grand opening gala in Atlanta — showing Bey in a long-sleeved, golden gown, posing with comedian Kway Rogers — prompted followers to question if she and JAY-Z were expecting another child. Fans were quick to comment things like, "Sis has to be pregnant," and "[She’s] using that purse to hide something." In response, Beyoncé posted a series of photos of herself to dispel the rumors. But the rumors persist, making "Are you pregnant?" her least favorite question. Girl, same.

Along with sharing how much this question bothers her, Beyoncé — who welcomed twins with JAY-Z, Rumi and Sir, in July 2017, and daughter Blue Ivy in 2012 — also touched on the stresses that come with being a working mom, describing balancing work and life as "the most stressful thing for [her]." "Making sure I am present for my kids — dropping Blue off at school, taking Rumi and Sir to their activities, making time for date nights with my husband, and being home in time to have dinner with my family — all while running a company can be challenging," she wrote, according to ELLE. "Juggling all of those roles can be stressful, but I think that’s life for any working mom." So true.

Related to comments about her "looking" pregnant, one fan asked Beyoncé through ELLE's AMA how it feels to have people commenting on her appearance so often. And, of course, she had the perfect response to this question as well. "If someone told me 15 years ago that my body would go through so many changes and fluctuations, and that I would feel more womanly and secure with my curves, I would not have believed them," she responded. "But children and maturity have taught me to value myself beyond my physical appearance and really understand that I am more than enough no matter what stage I’m at in life." The key, she continued, is giving zero f*cks. "Also knowing true beauty is something you cannot see. I wish more people focused on discovering the beauty within themselves rather than critiquing other folks’ grills."

Note to self: the next time someone asks me if I'm having another baby or really anything personal that's none of their business, follow Beyoncé's lead.